Across the Pond: On the Campaign Trail--And Why

Nina Kaufman
May 3, 2010 min read
Opinions expressed by Entrepreneur contributors are their own. 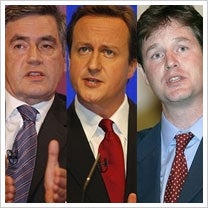 What can we learn from the upcoming general election in the UK this week?

In college, I toyed with the idea of journalism as a career. Note that I said "toyed with the idea of," not "toyed with the career." Would that I had the intestinal fortitude to drop into the bowels of some war-torn region to interview an elusive terror-cell kingpin where my physical safety was more likely than not to be violated. But, hey, I like creature comforts, like running water and hotel rooms without bedbugs. And, yes, I'm a chicken. So I've sated my tame wanderlust with safer forms of international travel.

It's a bit warped that my idea of a vacation is to take less than a week, and spend three of the four days on the ground working . . . or at least not getting a lot of sleep. But it's all for a good cause. One of my oldest and dearest friends, Ron Beadle, is running for political office in this week's general election. If he wins, he'll have achieved a lifelong dream of becoming a Member of Parliament. One current poll even shows him with a seven-point lead in his constituency.


There are a number of significant parallels to our political situation here in the U.S.--which I find fascinating as a poli sci major who studied at the London School of Economics & Political Science during (and just after) college. Two major political parties that have largely controlled the legislature; problems of deficits, tax-hike prospects, immigration, health care and unemployment are among the top issues affecting both countries.

Many of the small-business issues affect what we're dealing with here: fragile economy, slow to hire staff, tighter access to credit and concerns about whether an increased tax burden will fall disproportionately on their shoulders.

So this trip is a perfect storm for me: My husband and I will be with a friend at a life-changing moment in time; I get to travel; I can pretend to play journalist, a la The Boys on the Bus; I get to dust off a few brain cells from my student-of-politics days (and no, I didn't abuse ALL of  them at The Three Tuns bar--much more spiffy now than the sticky-floor-reeking-of-Silk-Cut-cigarettes venue I frequented); and I can indulge my lust for gizmo shopping with the purchase of a new netbook computer.

Disclaimer: I have a bias inthis election. I want my friend to win. But I will not tell you whom to vote for, even assuming that you, dear reader, are even eligible to vote in this election. My goal in this handful of "Across the Pond" posts is to explore some of the similarities and differences that small businesses are experiencing on both sides of the Atlantic. After all, as George Bernard Shaw quipped, just "two nations separated by a common language"?