The President's Export Initiative: Can Our Ports Handle It?

By Carol Tice May 5, 2010
Opinions expressed by Entrepreneur contributors are their own. 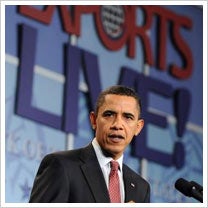 I've been following the story of President Barack Obama's Export Initiative with interest. The initiative's goal is to double U.S. exports in five years, in an effort to bring our trade deficit back into balance.

The initiative brings new funding and staffing to federal agencies that help businesses sell overseas, with some of the effort targeted specifically to small businesses. All sounds good--but late last week, the Senate Finance Committee held a hearing about whether our nation's seaports could handle double the volume.

The testimony points up some potential stumbling blocks to rebuilding America's exporting power.

In general, seaport authorities indicated they could physically handle the increased volume--at the ports, that is. However, what happens once that cargo tries to hit the road, or gets barged downriver, is another matter.

Port of Portland director Bill Wyatt testified to the crazy-making slowness with which our nation is improving its waterways. In Portland, where nearly half of all our nation's exported wheat ships out, goods have difficulty reaching the port by rail or barge for departure. A project by the Corps of Engineers to deepen the Columbia River channel by 3 feet to make shipping easier is wrapping up this year. Guess when it started? Twenty-one years ago. So far, none of the Export Initiative's funding is directed at dealing with crumbling infrastructure.

Port of Seattle deputy managing director Phil Lutes told a similar story--goods can get out of the port, but getting to the port for shipment is tougher.

"Goods movement needs greater federal leadership, and a truly competitive, efficient national transportation system requires coordination that can only be achieved at the federal level," Lutes testified. "Bottlenecks in the supply chain can be found all over the country, but the cost of prioritizing and funding them is often beyond the means of the states, counties and cities in which the projects are located."

Let's hope the Export Initiative doesn't get small-business owners excited about exporting, hook them up with customers abroad through Department of Commerce and USDA programs, and then stumble when it comes to physically getting their goods to the dock.

Dog the Bounty Hunter Says He's Hot on the Trail of Brian Laundrie: 'He Was Here for Sure'