Across The Pond: Question Time

Nina Kaufman
May 7, 2010 min read
Opinions expressed by Entrepreneur contributors are their own. 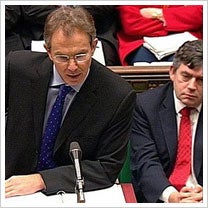 The British excel in verbal fisticuffs. Could our political debates benefit from their seemingly transparent and direct approach?

Maybe it's something in their educational system, but the British (and yes, I've noticed this with all of the English, Irish, Welsh, and Scottish people I've met) love a good political discussion. They gnaw on it like a dog with a bone. Chomp, chomp, chomp, drink a little water (or beer) and then go back to the bone, trying it from all angles. I saw that firsthand at the LSE Student Union meetings--like the way the minor leagues prime baseball players for what to expect in the majors.

One of the fun differences, however, is "Question Time." If you've ever listened to it on the BBC, it's compelling television. Sort of the way a three-car pileup on the Long Island Expressway is compelling. Unlike our C-SPAN debates (which don't deserve the name, in my view). Scripted presentations given in near-empty chambers where politicians drone on interminably and the rest of those who happen to be present w-a-i-t until the member finishes to deliver their version of a verbal dressing down (assuming anyone is still awake to notice). That's not debate: that's revolving-door speechmaking.

Oh no--Question Time can often morph into the verbal equivalent of the bar-fight scenes in Road House. The prime minister (among other government ministers) has to stand up in front of the House of Commons and defend his position to a querulous opposition. No teleprompters here (although as politicians, they know how to stay on their messaging). If the back-benchers could throw rotten vegetables, they'd do it.

Here's just a small sample of what you can expect from Question Time: