Across The Pond: Leave It to the Gods

Nina Kaufman
May 9, 2010 min read
Opinions expressed by Entrepreneur contributors are their own. 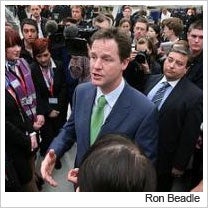 When striving for a business goal, when is enough . . . enough?

We were having dinner the other night with Lib Dem candidate Ron Beadle and his friend Eileen. Ron has been running himself ragged with this campaign, and we were talking about the toll it has taken on his health and his family life. (Ron's wife and children were at the table listening avidly). Ron and I were on one side of the debate; Eileen and my husband Joe were on the other.

Ron and I are both workaholics. Predisposed to have a goal--and then push ourselves to the brink of collapse in attempting to reach it. And then push a little more. Whether it's his political campaigns or my product creation, we both take the position that there's always just a little bit more that we could do/could have done. We could prepare a little more, make one more phone call, send out one more publicity blast, write one more article. We've never quite done enough.

Eileen, who has served as an elected official in several different capacities over the years, vehemently disagreed. "Yer nae good to uzz if yer layin' in the grund six fay-eet under," she said. "Yeev dun all ye cann. Yeev worked so hard, but now yeev gawt tah leave it tah the gods." Joe agreed with Eileen. "If you've done the best you can with the hours of the day you've been given, it's time to 'put it away,' " he added.

How do you know if you really have done the best you can? Joe's response reminded me of my college Introduction to Economics class. I remember little of it except for the lesson about "maximum utility curves." Something about eating blueberries--you can eat a certain amount of blueberries and enjoy them, but there will reach a point where you have indulged in one blueberry too many, and your enjoyment begins to decline the more you eat.

Similarly, Joe's take was that just when you see that the quality of your work start to slip--the computer keeps freezing, your brain keeps freezing, you're slower on the uptake in making decisions--that's when it's time to stop. Acknowledge you've done the best you could. And trust. "You're responsible for the effort, not the outcome," Joe concluded.

What's your barometer? How do you tell yourself when it's time to leave it to the gods?