Across The Pond: The Politics of Fear

Nina Kaufman
May 10, 2010 min read
Opinions expressed by Entrepreneur contributors are their own. 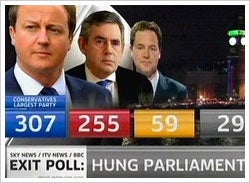 You may have heard by now that the Lib Dems got trounced at the polls, despite promising predictions to the contrary. Apparently, fear tactics got in the way of voting for a change. When times are tough, what do your customers want? The comfort of what they know (even if it may not be what they need)? Or something new? One last post on lessons learned from the UK general election.

The people (in Britain, anyway) have spoken. And what they want is . . . unclear. Neither of the two largest political parties received a mandate to govern. The Conservatives got 306 seats, short of the 326 they needed to command a majority. Labour got 258 seats--a loss of 91 seats--not enough to discount them entirely, but not a rousing vote of support.

What does that mean? Probably, that voters didn't want what they had (Labour), but had insufficient confidence in the alternative (Conservatives). As a result, they got what everyone feared: a hung Parliament. In other words, a government that has the very real possibility of being unable to function, stymied at every turn for lack of a majority or effective coalition-building. And the prospect of another general election within a year's time. We'll see what happens.

In the district of Newcastle North, my friend, Ron Beadle, lost his election. And the Lib Dems lost a number of wards that they had targeted and expected to win. What happened?

Business owners know from basic marketing that people will "buy" to avoid pain or obtain pleasure. And pain avoidance is a stronger incentive than pleasure. Newcastle, with its ship-building and blue-collar history, has traditionally voted Labour. Apparently, when the Conservatives were in power during the Thatcher years, the economic infrastructure of the region was decimated. Those memories die hard. And the Northeast has been buffeted by the economic downturn and immigration concerns.

So, with its 11th-hour leafleting, Labour played on the fear that if you vote for a change (the Liberal Democrats), you'd be casting a vote (in effect, if not in fact) for the Conservative Party. This, despite the long-standing local record of accomplishment of the Lib Dem candidate (Ron Beadle) and despite the complete lack of elected experience of the new Labour candidate. The devil you know (Labour) is better than the devil you don't know (Lib Dems) . . . which in any event is better than the devil you truly hate (the Conservatives). A lesser of two evils proposition. Smart campaigning, perhaps, but unfortunate in its result.

The economy isn't exactly sweetmeats and butterflies over here, either. How do you work with your clients and customers when times are tight and the mood is cautious? Do speak to them differently? What you offer them? What has worked for you?

Closing note:
In my view (yes, with all its possible bias), Ron Beadle ran a good, clean campaign with integrity. He's passionate about the issues and about raising the level of political discourse. He genuinely wanted to secure political office to make a difference for the people of Newcastle North, not to get himself a lifelong job with perks. To be part of the campaign, I endured a whirlwind week of sleep deprivation, overexertion and enough chips (French fries) to clog the arteries of an elephant. Ron Beadle didn't win, but I was immensely proud to have stood by his side. He rekindled for me all of the good and pure reasons that I studied politics, went into law and admire representative democracy as a system for peaceful change. God bless.