By Mikal E. Belicove May 20, 2010
Opinions expressed by Entrepreneur contributors are their own. 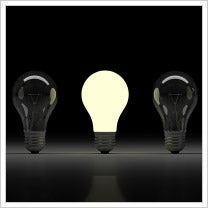 You walk past a group of employees gathered in one of your company's meeting rooms, laptops and notepads are strewn along a table the size of a small state. There are charts and graphs and PowerPoint presentations and three-quarters of the people in the room have a hand in the air. There's a lot of brainstorming going on here, you think to yourself. A lot of ideas being bandied about and you figure before this meeting breaks, these bright folks are going to come up with the one innovative idea that's going to turn this company around--big time.

That's not necessarily the case, say two Wharton School of the University of Pennsylvania operations and information management professors, who claim such brainstorming sessions can actually put a crimp in the original thought process. In a paper called "Idea Generation and the Quality of the Best Idea," Christian Terwiesch and Karl Ulrich, along with co-author Karan Girotra, professor of technology and operations management at INSEAD, suggest that corporate brainstorming is the enemy of innovation--whether that be the development of a life-changing commercial product, a new methodology that saves the company tons of money or a marketing plan that promises to draw in new clients from every conceivable demographic profile.

These three professors say you get better ideas--and better quality ideas--when you let your employees go off by themselves and do some heavy thinking and idea-generating on their own before presenting such notions to their peers in a group dynamic setting. This hybrid process can loosely be compared to the concept of "think before you act." Initial ideas from individuals are also important because they are generally unbiased opinion. Providing employees with a "sole" searching opportunity results in a better class of ideas and a larger number of quality solutions to whatever input the company was seeking, the paper claims.

And one way of obtaining such a raft of good ideas for discussion in a group setting is to task employees with generating a set number of ideas, innovations or solutions by a set deadline. The researchers says this ensures all members of a team have enough "quiet time" to come up with original, creative concepts that are unhindered by peer pressure. It also gets the employee away from the idea of embracing thoughts that are proposed by others or building upon ideas that are already on the table.

The researchers also discovered that the average quality of the ideas generated by individuals using the hybrid process was better than the quality of suggestions from the group dynamic process. According to the researchers, "The absolute best idea in a hybrid process topped the Number One suggestion in a traditional (group dynamic) model." In addition, they found that the hybrid method generated nearly three times more ideas than the traditional group dynamic method.

On the quantity side of the equation, Terwiesch, Ulrich and Girotra theorize that the number of individual ideas generated by each participant also influences the quality of those ideas. Since each member of the team is coming up with a like number of suggestions for the pool, instead of a disparate number from each participant, the pool of ideas would be larger. And a larger number influences the quality of those ideas, they said, much as the tallest five people from a city of a million people will most likely be taller than the tallest five people from a town of 1,000.

Another advantage of the hybrid system is the predilection of people to go along with the crowd or pleasing the boss in a group setting. When you're not armed with a list of your own good ideas, you concentrate on the ideas of others, maybe even feeling relief that you're on the sidelines. It's much easier to endorse an idea already on the table--or to suggest improvements to that idea--than to come up with an original concept on your own.

That creates a roadblock to innovation. It's just the kind of thinking that puts the creative brakes on any progressive development of an astounding new product or a cost-cutting manufacturing tool or process.

If this research sounds at all logical, you might want to give it a try. Go to your partners or employees and ask them to come up with three good ideas on their own by the end of next week. Then, reserve the meeting room and let everyone have their say. You could find yourself enveloped in a real brainstorm.