Fraud Watch: New Report Tells How Workers Rip You Off

By Carol Tice June 2, 2010
Opinions expressed by Entrepreneur contributors are their own. 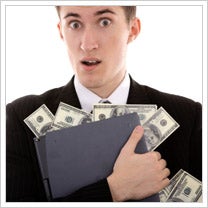 How do employees steal from your business? A new report from the Association of Certified Fraud Executives counts the ways. And no surprise, small businesses are the most vulnerable to inside theft jobs. Big companies have formal whistleblower programs, they have trainings, they have multiple finance-department employees watching each other. Small businesses? They've usually got nothing in this department. The results can be catastrophic.

The global survey found a typical company loses 5 percent of its annual revenue to fraud, which translates into $2.9 trillion in ripoffs. The median loss was $160,000 and nearly one-quarter of the frauds reported involved losses over $1 million.

The scary part is how long a thieving employee usually goes on stealing before they're caught -- the median was 18 months to discovery.

The most common way fraud was detected was a tip from another worker. So build those employer-employee relationships!

The good news: anti-fraud measures work to reduce losses. Among them -- watch for red flags including living beyond their means (43 percent of perpetrators were in the study) or financial difficulties (36 percent). Instituting a fraud hotline workers can call anonymously was also shown to cut losses and shorten the time until a fraud is uncovered.

Training in what constitutes fraud and how to spot it also helped reduce theft. Surprise audits turn out to be a powerful prevention tool. Done periodically, they create a climate where perpetrators worry they could be caught -- so they don't steal.

Entrpreneurs work so hard to build their businesses -- getting ripped off by an employee is like a stab in the heart. I think many business owners don't focus more on fraud prevention because they just can't believe it would happen to them. But it does.

I've known businesses where it took years to recover after a crooked bookkeeper looted the company coffers. It's worth the investment of a little time to focus on fraud and root it out.

Do you have fraud controls in place? What are you doing to spot problems at your company? Leave a comment and tell us about it.

What does the color of your brand say? This infographic teaches you how to send the right message

5 benefits of stocking your business online