By Carol Tice June 14, 2010
Opinions expressed by Entrepreneur contributors are their own. 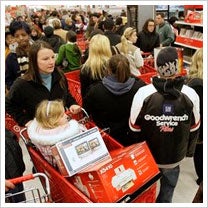 It's getting to be that time of year again -- the time when ordinary mortals think "vacation," and retailers think, "holiday orders." Especially big retailers, who need to order mass quantities far ahead of time to make sure they can get enough stock.

You would think this would be a season of cheer after several months of gently rising retail sales. But it turns out the situation is a little more complicated than that. Many retail chains are still nervous that consumer confidence may evaporate before holiday trees go up, The Economist reports. And that should make small retailers nervous, too.

The back half outlook for 2010 is really tough to call. Consumer studies have shown growing confidence for several months. But it's like retailers are still suffering post-traumatic stress from the deep recession of the past two years.

Shrinking comparable-store sales at Walmart for the past several quarters are also a puzzle to ponder. Does it mean some people now can't even buy goods Walmart cheap, or is it a positive sign that shoppers are moving up to higher-quality goods at stores such as Nordstrom and Target, where sales are rising?

The other side to holiday ordering is that advances in supply-chain management mean many companies are ordering for the holidays later and later. They're ordering 12 or 16 times a year instead of just once for each of the four seasons. So many can delay their verdict on whether to order big or play it conservative for the coming, critical holiday season.

Retail readers -- what's your holiday game plan? Are you thinking big, or still worried where the economy and consumer sentiment will be come December? Leave a comment and let us know your approach to ordering stock for the season.

5 steps to keep your email up to date