Carol Tice
Owner of Make a Living Writing
August 9, 2010 min read
Opinions expressed by Entrepreneur contributors are their own. 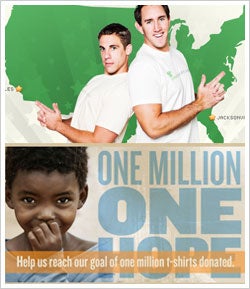 Once upon a time--OK, last year--two scrappy twentysomething entrepreneurs created a smash-hit marketing business, iwearyourshirt.com. With the money rolling in, Evan White and Jason Sadler wanted to give back -- so they created a program, the 1 Million Shirts Campaign, to donate shirts to needy people in Africa.

What could be so wrong about that? As it turns out, plenty.

As it happens, donating free clothing can be disruptive to fragile economies where many people subsist on selling used clothing. 1 Million Shirts was seen as patronizing and "all about the donor" rather than the recipient. The iwearyourshirt founders had stumbled into a raging controversy in international aid--whether in-kind donations really help anyone.

Criticism of the 1 Million Shirts campaign was widespread. There was a Time Magazine article about the controversy that prominently featured the pair's campaign, which was roundly criticized. (Sort of a win in the publicity-is-publicity view, but I'm sure not what iwearyourshirt had in mind.) The blogosphere was alive with snark. Aid workers closely followed the campaign and voiced their disapproval.

"As an African, I beg the 1 Million Shirts campaign dies a slow death," wrote blogger ABM on the blog Tales From the Hood. "We don't need another industry-crushing initiative by clueless do-gooders."

Besides giving shirts, the other problem with the campaign was the designation that it was for "Africa"--a vast continent where many people in quite a few countries can afford their own shirts and don't have trouble finding shirts to buy, thank you very much. The idea that these donated shirts were going to "change the world," as iwearyourshirt's site claimed, rankled them.

To sum up, White and Sadler were in over their heads. They had no international aid experience, and it showed.

Who knew doing good could turn out to be so hard?

After seeing their little charitable-giving effort become the focus of international scorn, the duo killed the 1 Million Shirts program off late last month. They now plan to give the shirts to disaster-relief charities working here in the U.S. They'll also donate a day each month of shirt-wearing to charities. Which ought to work just great.

Their story offers good lessons for any business owner considering how to give back.

It's wonderful that so many young entrepreneurs are thinking about philanthropy early on in their startups. That's a fairly new development in the business world.

Even a few decades back, companies went along 20 years or more (hello, Microsoft!) before getting serious about philanthropy. Nowadays, my e-mail inbox is stuffed with releases from very young companies that are actively giving back to their communities. Often, the philanthropy is built right into the business model from day one. I think it's awesome.

But business owners should realize starting a charity effort requires a little research, and a little thought, before plunging ahead. Nobody wants their attempt to "give back" to the community to create negative backlash about their company.

So--please give generously out there. But think before you give, and make sure what you're doing makes sense.