By Diane Danielson September 27, 2010
Opinions expressed by Entrepreneur contributors are their own. 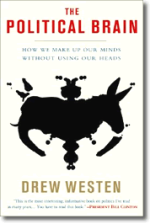 Why write about politics on an entrepreneurial blog?  If you've read my reviews long enough, you'll know that I like to occasionally venture beyond business books for fresh insights. I've also written about how political campaigns are entrepreneurial, while the actual role of being a legislator is managerial. Hence you can learn a lot from campaigns. Still, I wasn't going to review this until I read Seth Godin's blog post last week which accurately summed up The Political Brain: The Role of Emotion in Deciding the Fate of the Nation by Drew Westen.

The market is not seduced by logic.  People are moved by stories and drama and hints and clues and discovery.

Logic is a battering ram, one that might work if your case is overwhelming. Walmart won by logic (cheap!), but you probably won't.

Seth nailed it. Consumers do not care about logic; they want stories and emotion.  And so it goes with voters and constituents.

Note that while the book criticizes Democrats, it's written with a liberal bent. Westen makes no apologies for this as he walks through the mistakes made by Democrats in recent years. Yet, if you step back and take out the politics, these are mistakes made by entrepreneurs all the time.

2.  Selling your product based on arguments for why people should buy, not by eliciting the right feelings in consumers. People buy based on emotions, not on who has the best arguments for why someone should buy the product. The example here was again from a Gore vs. Bush debate where Bush attacks Gore's character. Rather than respond to the allegations and insinuations, Gore tries to refocus on issues. This didn't go over well.

3.  Assuming that the same campaign strategy will work for all demographics. What ignites emotions in some regions, i.e. New York and California, may be entirely different from what connects emotionally in the deep South. The same is true of a product. After its anti-woman ad on the Superbowl, it was clear that Bridgestone tires was not interested in selling tires to women. I hope they would have a totally separate ad campaign to run during Dancing with the Stars.

4.  Ignoring core values and responding to what the people say they want. One of the problems Westen points to as a downfall of Democratic candidates is that they make decisions based on polling results. Heck, if Steve Jobs ever polled people, do you think they would've said ... yes, we want this thing called an iPad?

5.  Not telling a story. Whether it's on the campaign trail or in promoting a product or service, the one with the best story wins emotionally.

For political junkies, this book is truly fascinating. Unfortunately, it ends before the Obama campaign. Yet one can see exactly what he did during his campaign to overcome many of the obstacles his predecessors struggled with. For me, however, the highlight of the book was the reprinting of some of the great political speeches, slogans and ads, from Lincoln to Roosevelt to the present.

Since it's election season, The Political Brain is a fun read that just might spark some ideas for entrepreneurs.