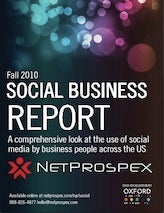 NetProspex, a Mass.-based company that manages a B2B focused sales and marketing database platform, has released its Fall 2010 Social Business Report, which it touts as "a comprehensive look at the use of social media by business people across the U.S." (I have some serious issues with the report, but more about that later.)

This new report reveals the state of social media use by business people across all industries, geographic regions and job functions. The 25-pager follows on the heels of a report released in May that included NetProspex's snapshot of social media activity among employees of the nation's top corporations. Both reports include a listing of the 50 most social corporations in America.

Using what it calls the NetProspex Social Index, corporations were ranked on how often their employees used social networking tools such as Twitter, Linkedin and Facebook. An NPSI score is a composite of three numbers:
NetProspex grouped employees into industry categories and then took the average "NPSI" of the overall industry. More than two million contacts were analyzed from within NetProspex's business contact database.

Predictably, the search engines and online portals industry topped the list, ranking as the most social media savvy industry in the country with a NPSI rating of 98.74 -- nearly a third higher than the second-place entry. Second was the advertising and marketing industry with a 63.93 rating, followed by banking, which outpaced the traditional media industry this time around with a 63.44 compared with media (TV, radio, newspapers and magazines), which scored a 55.11.

Other industries ranking in the 50 percent range were toys and games -- named the most media savvy in the consumer products sector -- followed by HR and recruiting and IT industries. Software and consumer electronics scored in the 40s, and retail apparel, credit cards and transaction processing, flowers, telecommunications, travel and tourism, cleaning products, department stores and superstores and gambling and gaming industries all scored in the 30th percentile.

Trucking, moving and storage had the distinction of being the only blue-collar industry to make the Top 50 list, while mining, automotive repair and collision service, as well as wood production, were low-social ranking industries that didn't even make the list.

The colorful NetProspex PDF is also peppered with "fun facts," including the factoid that employees of the funeral home industry don't tweet and also suffered the lowest average social rating overall. This despite the fact that their employees have more Facebook friends than people who work for zoos and national parks. Other tidbits in the report include the breaking news that those in the travel industry have twice the Facebook friends as those in the restaurant business. And hospitals and clinics had an average social rating of 6.97 -- nearly half that of the lowest ranked industry on the Top 50 list.

The report also features the industries with employees who utilize Twitter the most, with search engine and online portal companies scoring the highest, followed by media, banking and then advertising and marketing. One section in the report reveals the most social job. It shows that marketing, advertising and communications professionals rank highest among social savvy employees with an NPSI ranking of 68.29, following by HR and recruiting officials, communications and public relations employees, IT workers and sales people.

And if you're trying to interact with a company through its CEO, forget about it. CEOs ranked 11th on the list with a score of 17.36. Office managers and customer service reps outpace CEOs, so the report suggests taking your social media skills in that direction.

The Social 50 company ranking is perhaps the highlight of the NetProspex report, ranking companies based on those with the largest number of social employees. The most socially savvy company this time around is Google (98.74), which rose from fifth place to top Microsoft (63.93) as top banana. Also in the top 10 were Amazon (63.44), eBay (551.71), Dell (47.07) and Best Buy (46.14). Apple scored twelfth, Oracle at 18th, Disney at 23rd and Office Max at 24th. The complete listing is available online at https://www.netprospex.com/np/social/report/fall2010/industry.

As interesting and as attractively packaged this report is, its usefulness is dubious. As a business communication strategist and social media communications practitioner, I found the NetProspex report to be significantly short on depth and methodology.

When a report starts off with an outlandish statement like, "A Twitter username is becoming just as important as a phone number to reach and engage with customers and prospects," you've got my attention. The notion that a Twitter account is as important as a telephone number is pretty much nonsense. Being able to communicate about real issues via the spoken word will always trump messages limited to 140 characters.

But even more disturbing to me is the methodology of evaluating employee activity as opposed to company activity. I just don't see how Susie Smith -- an Amazon records clerk who religiously checks out Hollywood actor Ashton Kutcher's tweets -- has anything to do with how social-related marketing is helping Amazon. How exactly does an Amazon employee who wants to go online to see how Ashton and Demi are getting along in their fifth year of marriage help the book company's bottom line? Negatively, if this is what Amazon's employees are spending their time doing.

And then there's the statement claiming that NetProspex's Social 50 "is determined by a company's employees social connectedness, social activity, friendliness, and reach across top social networks, including Facebook, Twitter, and LinkedIn." What value is this to the average entrepreneur or startup? What tips, tricks, strategies or warnings can be possibly be gleaned from these 50 firms?

And while I'm on a rant here, why on earth are Zappos and Starbucks missing from the Top 50 list?  Zappos has 499 employees who are very actively tweeting from a business-related standpoint (see http://zappos.com/employees), and Starbucks' social media strategy and impact are legendary (See my earlier story, How Starbucks Builds Meaningful Customer Engagement via Social Media.)

On the flip side, Apple checks in at 12 on the list, yet it doesn't even have a Facebook or Twitter account. To be fair, Apple's vice president of iPhone software does have a verified Twitter account with more than 33,000 followers, but he's posted exactly zero tweets to date. I'm just saying.