Use of Geosocial Services is Underwhelming -- for Now 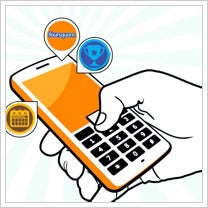 Based on a Pew Internet survey released this morning, only 4 percent of American adults who go online on a regular basis are using any form of geosocial or location-based services like Foursquare. And on any given day, only 1 percent of internet users are taking advantage of these services. To complete the survey, Pew Research Center's Internet & American Life Project, based in Washington, D.C., contacted 3,001 ages 18 and older between Aug. 9 and Sept. 13, 2010.

Not surprisingly, the report shows that those who are in the habit of sharing their immediate location with their friends -- or "checking in" with acquaintances who might be in the immediate neighborhood -- are more likely to be young and mobile adults between the ages of 18 and 29. These geosocial gadflies who go online with their mobile phones use a location-based service like Foursquare or Gowalla, according to the study.

But perhaps we should take a second to describe the geosocial service to those who might be unfamiliar with the concept. Location-based services, which run on standalone software applications, or "apps," permit users of smartphones and other mobile devices to notify friends when the user is nearby

These services are somewhat like Facebook or Twitter status updates -- sending short messages online or by text to update friends on your whereabouts and activities. The benefit to entrepreneurs and business owners comes when users "check in" from their establishment, leaving comments or reviews for their restaurant, coffee shop or other business in the form of electronic messages that have the potential to be seen by their pals and others.

Savvy businesses and organizations are just now coming up with ways and means to induce these "check-ins" by offering their geosocial customers incentives and rewards for doing so.

But the just-released Pew report finds that progress has been slow. Of the 4 percent of adults who participate in such online social engagements, the survey showed that 7 percent of those who go online with their mobile phone use a location-based service. That increases to 8 percent for adults between the ages of 18 to 29. Ten percent of Hispanics use these services, far outstripping whites (3 percent) or African-Americans (5 percent). When it comes to household income or amount of education acquired, the survey shows insignificant differences.

Six percent of the men surveyed said they use a location-based service, compared to only 3 percent of women.

And of those who go online with their mobile phones, a total of 7 percent say they use a location-based service, along with 5 percent of all wireless internet users. Five percent of these users say they search for friends on a daily basis, while another 5 percent hunt around several times a week. One percent indicate they utilize such services less often than that. Most users live in cities (6 percent) with suburban participants amounting to 4 percent and rural users, 2 percent.

With only 1 percent of users taking advantage of these location-based services on a daily basis, you would think the future is bleak for such an enterprise. But consider this: Status-updating services like Twitter have grown from 6 percent of online adults in August 2008 saying they had used such a service to 24 percent this past September. That's quite a leap.

So the fact that the Pew survey shows only 4 percent of internet users currently use location-based apps and services like Foursquare and Facebook Places isn't all that surprising to me. Especially when you stop to consider how little incentive there is for people to use them.

But one company that might change all that is SCVNGR, Inc., a Google Venture-backed mobile gaming developer. This Cambridge, Mass.-based enterprise has introduced SCVNGR, a game that enables businesses to create reward-based challenges that consumers attempt to complete for points. These points unlock product or service-related rewards and discounts, which allows businesses to engage with customers and increase sales.

But more on SCVNGR -- and how businesses can leverage the location-based game platform/app -- next week.