Social Networking Picks Up Steam on a Global Level

By Mikal E. Belicove December 17, 2010
Opinions expressed by Entrepreneur contributors are their own. 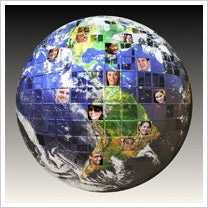 It should come as no surprise that social networking has rocketed in the United States -- the country where it all began (thanks, eBay). What is surprising to some, however, is how widespread the use of social networking sites and platforms has become on a global scale. Did you know, for instance, that of Facebook's reported 500 million-plus registered users, 70 percent live outside the United States?

In fact, a survey released this week by the Pew Research Center's Global Attitudes Project goes so far as to call social networking "a global phenomenon." The survey, conducted last spring, shows that people all over the world are using the Internet for social networking. The poll included respondents from 22 nations representing a broad range of socio-economic development.

If you conduct business abroad and social media plays a role in your business-communication strategy, these figures should be discussed with anyone in your organization responsible for international sales and your marketing team.

In the U.S., of the 92 percent of Americans who say they go online, 46 percent claim to participate in social networking tasks, while 36 percent say they do not. Only 18 percent of those surveyed in the U.S. claim they never go online.

The nations that come closest to matching the United States in terms of social networking are Poland and Britain with 43 percent and South Korea with 40 percent usage.

And at least one third of the survey-takers in France (36 percent), Spain (34 percent), Russia (33 percent) and Brazil (33 percent) engage in social networking. Germans and Argentineans follow, with 31 percent. It is at this point where social networking slips dramatically into the 20-percentile range, with figures showing Turkey at 26 percent; Japan and Jordan with 24 percent and China and Mexico rounding out with 23 percent.

Not surprisingly, the use of social networking is a rarity in many less-developed nations. That is because many of these nations don't go online in the first place, rather than a lack of interest in social networking. But in those countries where the Internet is used, participants also use social networking.

For example, in Indonesia and Pakistan -- where 91 and 94 percent of the population has no access to the Internet, respectively -- 6 percent of Indonesians and 3 percent of Pakistanis claim to be involved in social networking.

Again not surprisingly, Pew's global poll found that social networking is dominated by the young. In more than half of the countries responding, social networking was most prevalent among those under 30. Only in Britain (58 percent), Poland (57 percent) and the U.S. (55 percent) are the majority of social networkers in the 30 to 49 year-old bracket.

When it comes to gender, men and women are fairly divided in their use of social networking online. Except in the United States that is, where women take part in social networking more than the men (52 percent versus 41 percent).

Regarding other technologies, the Pew survey shows that people in most nations are using cell phones, computers and the Internet much more than in 2002 (when the topic was last researched). One stunning example of growth is Russia. In 2002 only 8 percent of respondents said they had a cell phone, a figure that has grown to 82 percent today.

Access to computers has also risen dramatically, with the median percentage standing at 50 percent today among 16 countries surveyed, compared to 32 percent back in 2002.

Social networking on a global scale offers an enormous opportunity for growth. Putting these tools to good use can help you connect with international audiences -- potential customers, partners and even suppliers. But that success depends on your communications skills, and that includes taking into account cultural differences. Don't assume, for instance, that what works in one English-speaking country will work in another. Cultural differences in business communication are just as vast as the usage statistics presented here.