By Laura Lorber December 22, 2010
Opinions expressed by Entrepreneur contributors are their own. 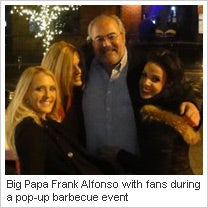 It's been just over 30 days since we began our Social Media Challenge for Big Papa's BBQ in Denver. Turns out, "challenge" was the perfect word for it. There was no online barbecue conversation to speak of in this city when we started. There were no followers for Big Papa's. They had no brand, voice or marketing plan. The winter was bearing down -- hardly BBQ season. And as for Big Papa's experience in social media? Nonexistent.

But, in Denver's Best BBQ Battle -- the social media campaign LeeReedy/Xylem Digital created, we've built a brand, a following and, most importantly for those who doubt social media's value, an increase in revenue for the restaurant.

To our reporting detriment, it took three weeks for Big Papa's BBQ to institute proper tracking mechanisms in its three restaurant locations. But we have two significant successes to share: the number of people walking into their restaurants who heard about us through our social media efforts and year over year revenue for December.

Total: 733 people were driven to eat at Big Papa's using social media in just one week.

In the first two weeks of December:

What's next? Facebook, Twitter, email, as well all ongoing promotion and dialogue on these venues, transfers over to the management team at Big Papa's BBQ. Our blog posts will be less frequent for Entrepreneur. But each time we check in, we'll let you let know how it's going, and you can weigh in on how you might do it better.

* The restaurant industry average for email click-through rates is 3.4%, and email open-rates is 26%, according to 2010 Marketing Sherpa Benchmark Guide.