Has the Recession Tipped Your Work/Life Balance?

Carol Tice
Owner of Make a Living Writing
December 27, 2010 min read
Opinions expressed by Entrepreneur contributors are their own. 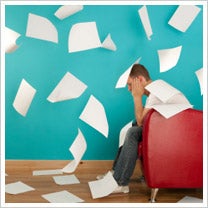 When it comes to work/life balance, apparently, perception is not reality.

A recent study from NFI Research shows that while executives often think other people's work/life balance is out of wack, those same execs feel they're juggling their own lives pretty well. A majority of senior executives and managers in the survey -- 57 percent -- said people in business today have unbalanced lives. Eleven percent describe them as "extremely unbalanced."

But then there's that look in the mirror, which paints a rosier picture. In their own lives, 58 percent of the same execs considered themselves nicely balanced, thank you -- 15 percent said "extremely balanced," and 43 percent said "somewhat balanced."

Interestingly, 63 percent of small-company execs said they feel "most people in business are unbalanced," compared with a much higher negative perception (78 percent) from managers at larger companies.

Narrative responses indicated that CEOs are still trying to find time for family, despite the pressures of the downturn. One reported he could easily work 80 hours a week, but had set a goal of only 45 hours.

Echoing one common sentiment, a respondent wrote, "I believe most people are putting in more hours today than pre-recession. More effort is being given to protecting business, finding business, and developing business."

How's your work/life balance -- are you working more since the downturn? Let us know how you juggle your responsibilities.
More from Entrepreneur