Can Complaining About Your Boss on Facebook Get You Fired? 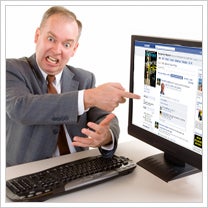 Here's a question for the water cooler crowd: Can complaining about your supervisor on Facebook get you fired? Can a status update change the status of your employment?

I've opined in the past about the dangers and drama of authoring and then posting job-related commentary on Facebook or other socially engaging online properties (see Pitfalls of Using Social Media as an HR Tool). But now the legal eagles from the National Labor Relations Board (NLRB) are sinking their talons into the topic. It seems an employee of an ambulance service in Hartford, Conn., posted some negative commentary about her supervisor on  Facebook following a work-related spat. It probably didn't help that the employee received supportive responses back from her co-workers.

The woman was fired as a result of the online onslaught and last October, took her case to the NLRB. The labor board subsequently filed a complaint alleging that American Medical Response of Connecticut, Inc. -- the ambulance service -- illegally terminated the employee for initiating the Facebook faceoff. The board's complaint also claims the company illegally denied the employee's request for representation from her union, Teamsters Local 443, and furthermore, "maintained and enforced an overly broad blogging and Internet posting policy."

The NLRB's internal probe of the incident found that the employee's Facebook posts were protected by law and her right to free speech was obstructed by the company's Internet posting policies, which prohibited bad-mouthing the ambulance company without prior permission. A hearing on the matter is scheduled for Feb. 8.

Although the labor board has looked into social media policy issues in the past, Jonathan Kreisberg, regional director of the Hartford office of the NLRB, told me this is a highly unusual case involving the NLRB. It's the first time the labor board has filed a federal complaint and scheduled a hearing before an administrative law judge.

What does this mean to you as an employee or employer? To be sure, it seems fairly obvious that blogs, Facebook, Twitter and other social media sites are not the ideal canvas for creating controversy about your work situation and, in particular, your boss.

And if you're the employer, you should keep an eye on the Hartford case to find out if the labor board indeed prevails. If the ruling confirms the NLRB's opinion that such online opinions should not cost employees their jobs, it might be time for a fresh look at your company's employee handbook.

Meanwhile, stay tuned to Daily Dose for the latest news on this interesting and far-reaching case. I'll be on top of new developments.