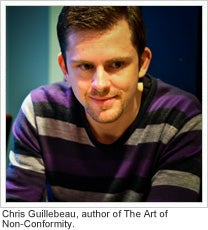 When he was 20 years old, Chris Guillebeau walked out on his job packing boxes at a Memphis, Tenn.-based FedEx. He was fed up and vowed never to return to "traditional work" again.

Now 32, Guillebeau (on Twitter: @chrisguillebeau) has taken up a handful of solo ventures over the last decade, including selling a series of business/lifestyle-themed guides at UnconventionalGuides.com -- an operation he says has grown into the mid six-figure dollars a year range.

The self-described non-conformist also penned the aptly-named book, The Art of Non-Conformity (2010, Perigee Trade). "The central message of AONC is you don't have to live your life the way other people expect you to," says Guillebeau. "I write for a small army of remarkable people, and I want the message to go to people all over the world who want to choose the road less traveled."

1. @copyblogger
Followers: 69,710
Tweets: 10,927
Copyblogger.com founder Brian Clark offers advice on all things related to business strategy, not just copywriting.
Sample tweet: "Imitation may be flattery, but if you s--k, I'd like to politely decline the compliment."

2. @pamslim
Followers: 18,801
Tweets: 22,669
Pamela Slim is a business coach and author of Escape from Cubicle Nation, which Guillebeau describes as "the book several other people tried to write."
Sample tweet: "biz-building tip: if you do a live preso at event with PPT slides, upload to SlideShare and narrate. My set here: http://ow.ly/3LmcH"

3. @jonathanfields
Followers: 27,499
Tweets: 20,591
Jonathan Fields, a self-described serial wellness-industry entrepreneur and author of Career Renegade: How to Make a Great Living Doing What You Love (Crown Business, January 2009) is "the original Career Renegade ... and also the most generous guy I know," Guillebeau says.
Sample tweet: "Morning, friends. Who can I help today?"

4. @swissmiss
Followers: 166,442
Tweets: 234
Tina Roth Eisenberg is most recognized for her popular design blog and studio, and also provides helpful tweets and links for the broader community of entrepreneurs and freelancers.
Sample tweet: "Bad start in the day: @TeuxDeux is down and am locked out from my studio. Deep breaths. #whydomystudiomatescomeinsolate"

5. @davidbullock
Followers: 13,401
Tweets: 4,537
Business development specialist and "profit engineer" David Bullock provides helpful tweets about metrics and testing - something some entrepreneurs ignore at their peril.
Sample tweet: "Knowing what to do and doing what you know is the simple gap to bridge for business success #in"