By Bryan Keplesky March 11, 2011
Opinions expressed by Entrepreneur contributors are their own. 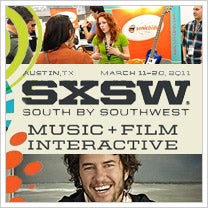 The first two months of the year in Austin have always had a bit of a sleepy quality to them, which is surprising considering how much actually goes on every day and night in our fair city. But, collectively, all Austinites take one deep breath before the plunge into the ten day international Interactive, Film and Music Festival called South By Southwest.

This is Door Number 3's fifth year of covering SXSW. Interactive has always been our favorite part, not only because of the yearly parade of promising upstarts, big names, brands and exciting new technology, but because of all the people who attend.

Big personalities and, ultimately, big brands have notably careened through the Austin Convention Center -- where most of Interactive takes place over the years. Twitter and its co-founders, Jack Dorsey, Biz Stone and Evan Williams made their debut at SXSW in 2007, garnering major Web awards and praise. There was also an infamous keynote interview with Facebook's Mark Zuckerberg in 2008. Last year, geolocation technology was a major focal point, with much attention paid to Austin-based Gowalla CEO Josh Williams.

Likewise, this year, there will surely be ample fodder for headlines. And while we'll be there to cover the big releases about the latest crazes, for the most part, we'll paint the picture of the other side of SXSW. In addition to big names, Interactive attracts a certain type of person -- the entrepreneurs, inventors and risk takers we call the Gatecrashers.

They're the people who are not yet on the main stage, but they come with an eye (and a liver) for new relationships, partnerships and collaborations. They come with a dream and a promise to be heard. Amongst the general insanity of the Convention Center, you will find these Gatecrashers on the outside holding their own and not necessarily looking in or caring about what's happening in the more controlled arena.

Business cards will be exchanged by the box-full, iPhones will be bumped and new visions will find shots in the arm. This is the true spirit of SXSW and what we're most excited to share. Through the upcoming days, we'll paint the picture of the Gatecrashers' scene because from that vantage point we're able to capture the true entrepreneurial spirit of Interactive.

Again, we'll cover the big names and the big brands. We'll also post about new and exciting technologies that have the potential to affect the zeitgeist, the marketplace or both. We'll even bring you on-the-street snapshots and sound bites to give a 360-worldview of the event. After all, Interactive -- as its name so aptly suggests and the technology has proven -- is about people.

It's an exciting time to be in Austin, and we're looking forward to sharing our experiences with it. And as a SXSW-veteran, I second Jennifer Wang's advice to hydrate.