At SXSW, A Startup for Startups

By Bryan Keplesky March 15, 2011
Opinions expressed by Entrepreneur contributors are their own. 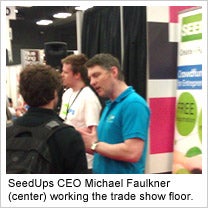 When faced with a person handing out flyers, many people tend to smile vaguely and just continue walking. This week at SXSW, however, is the time to suppress that inclination. In fact, during Interactive, a good rule of thumb is to take every flyer or card that comes your way because there’s so much creative marketing happening, you just don’t know what you’ll get.

SeedUps is an excellent case in point. While exiting a panel, I nabbed a flyer with the title, "Got a Tech Start-up...Need Funding?" After reading more about the company, which basically applies the crowdfunding model to startups, my interest was piqued. I was able to meet with SeedUps founder and CEO Michael Faulkner in the middle of the hectic Interactive Trade Show & Exhibition.

First, let me describe the last few whirlwind weeks Faulkner and SeedUps have had. The company, based in Ireland, launched a beta version last November in the UK, and officially launched in February of this year. Their U.S. launch is this week at Interactive.

Second, here's some background on Faulkner who also serves as the CEO of currency services company Euroxchanger. At that post, he realized there needed to be a better way to funnel seed money to young startups who often run the risk of getting lost in the banking sector or other more traditional ways of funding. Inspired by crowdfunding sites like Kickstarter, SeedUps was born.

There are two sides to SeedUps, one for investors and the other for entrepreneurs. Wealthy investors interested in a diverse portfolio -- particularly in tech, web and mobile -- are invited to join the website with the opportunity to invest up to $25,000 per business. For entrepreneurs, anyone can sign up and pitch. SeedUps curates the final list, with only the most promising startups having access to the investors, who then select the candidates to fund through the "wisdom of the crowd." (Faulkner calls this "crowdinvesting.") Ultimately, it's a faster model with a better fair market value for startups looking for up to $250,000 in funding.

Faulkner looked at several different conferences before choosing SXSW. He liked SXSW because it offered a mix of informative panels, a pool of startups, and also plenty of opportunity to network. In true Gatecrasher style, he didn't even know he'd have access to the trade room floor until this morning, when he was able to secure a tiny spot in the behemoth UK Trade & Investment booth, representing diverse companies like DADapp, MoodShare and Planzai. With only enough room to place a pop-up banner, he and his small crew of associates started working the floor.

SeedUps is actively looking for U.S. startups. Since their launch in the U.K. they've raised $13.5 million from investors and a roster of 300 entrepreneurs. After SXSW, Faulkner plans to travel to San Francisco and set up a small headquarters before returning back to Ireland.

What do you think? Is SeedUps onto something?