By Diana Ransom April 6, 2011
Opinions expressed by Entrepreneur contributors are their own. 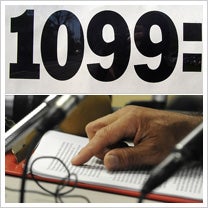 If it's true that the squeakiest wheel gets the grease, small-business owners must have been squealing on this one.

By a vote of 87 to 12, the Senate on Tuesday overwhelmingly agreed to pass a House Republican measure that would repeal a long fought-over provision in the Affordable Care Act that required small-business owners to file 1099 forms every contractor they paid more than $600 in a year. Yesterday's bill also moved to repeal a second 1099 requirement aimed at landlords.

Those provisions, which would have kicked in at the beginning of 2012, were largely viewed as yet another unnecessary bookkeeping burden placed on small businesses. And consequently they got the attention of small business advocates and politicians alike. It also became something of a battle-cry against health-care reform among many small-business owners. Though, even the normally-neutral Small Business Administration endorsed the provision's repeal.

In his State of the Union Address, President Obama shared his own concerns with the "flawed" provision: "Small businesses are the engine of our economy and eliminating the 1099 reporting requirement is the right thing to do."

Although earlier attempts to repeal the provision failed to pass muster Congress since the notion of how to pay for the repeal couldn't be resolved, yesterday's bill managed to dodge that bullet.

To eliminate the provisions and offset the revenue they would have generated, the bill would reduce some of the health insurance subsidies that are provided to low- and middle-income Americans who purchase health insurance under the new law. Since subsidies are based on previous years' income, the taxpayers who earned more than anticipated would be required to return some of the overpayment to the government.

Although the President has expressed his support for the eliminating the 1099 measure from the health-care law that passed last year, it's not clear when or if he'll sign it.

UPDATED:
President Obama signed the bill known as H.R. 4, which repeals the 1099 measure from the health-care law, into law on Thursday April 14, 2011. "Small business owners are the engine of our economy and because Democrats and Republicans worked together, we can ensure they spend their time and resources creating jobs and growing their business, not filling out more paperwork," the President said in a statement.

Without that provision, what's your view on health-care reform? Leave a comment and let us know.