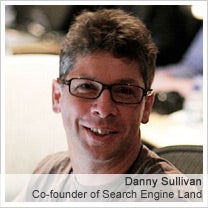 From writing content with commonly searched-for phrases to cross linking to other pages, a lot can go into optimizing a business's website for maximum visibility. One person who's familiar with the ins and outs of search engine optimization is Danny Sullivan. A former newspaper journalist, Sullivan in 1997 launched a SEO-focused news site called Search Engine Watch, which he sold the following year.

Sullivan left the site in 2006 and co-founded Search Engine Land with executive editor Chris Sherman. As editor-in-chief, he oversees the sites content, which ranges from topics such as SEO, search engine marketing, pay-per-click and social media.

"Business owners all should be thinking about SEO," says Sullivan, who is 46. "It's one of the easiest and most effective ways to attract new customers to your business. If I said to you, 'I'm ready to send you five or six customers that are ready to make purchases,' would you say no to that? Well, that's exactly what SEO can do -- sometimes without much work. Simple changes to a listing in Google Places can impact whether or not a business will get more people finding them."

Sullivan also is active on Twitter, often tweeting for Search Engine Land (@sengineland) and frequently on his personal account (@dannysullivan), which has nearly 125,000 followers. Here, Sullivan identifies his picks for Twitter feeds worth following for insight on SEO.

2. @mattcutts
Followers: 105,298
Tweets: 12,505
The head of Google’s web spam fighting team, Matt Cutts has had a decade of giving SEO advice to publishers who hope to do better in Google. "Knowing what Matt says is just good sense" for any SEO expert Sullivan says.
Sample Tweet: Today's webmaster video: How can I learn about the technologies used at Google? http://goo.gl/l9ReO

3. @aaronwall
Followers: 16,872
Tweets: 4,454
Some might consider Aaron Wall the anti-Matt Cutts: The founder of SEOBook.com, he’s a long-time SEO expert who likes to "blow the fairy dust off the happy land of unicorns that Google sometimes makes its search results out to be," Sullivan says.
Sample Tweet: sad to see the http://www.google.com/sktool/ go away. :( ... but am glad to have scraped it aggressively before it did ;)

4. @googlewmc
Followers: 21,575
Tweets: 301
Google Webmaster Central offers all official Google information relating to SEO and webmaster features. The goal is to provide followers with "detailed reports about your pages' visibility on Google."
Sample Tweet: New webmaster video: Will Google give a better ranking to a website which runs AdSense? http://goo.gl/k3k0s

5. @seroundtable
Followers: 4,298
Tweets: 8,708
SEO experts love to swap stories about what’s working and what’s up on forums across the web. Search Engine Roundtable, a site that discusses search engine-related content that's been reported on other online forums, points followers to what Sullivan says are the best threads, at sites such as WebmasterWorld, Cre8asite, Digital Point and Sphinn.
Sample Tweet: What SEOs Can Learn From Angry Birds On Google http://ser.bz/fdKVue

Who do you follow to stay up on the latest in SEO developments? Leave us a comment and let us know.