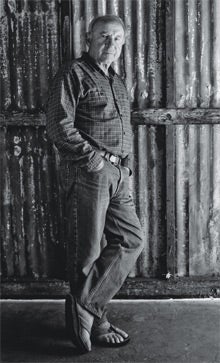 Not even the recession slowed Patagonia down. The outdoor gear and clothing retailer made $333 million in 2010--its most ever. And the year since Entrepreneur profiled legendary climber, environmental activist and Patagonia founder Yvon Chouinard has been a busy one indeed.

This spring saw the launch of the Patagonia Music Collective, which represents the first time a business has partnered with musicians to give back to the environment. The program features about 100 artists--Pearl Jam, Jack Johnson and Maroon 5 among them--donating $0.99 "benefit tracks" on iTunes. All (that's right, all) sales proceeds go to environmental groups of the artists' choosing.

We started by asking Chouinard why the collection was launched (because donating 1 percent of sales to environmental causes isn't enough) and how much he expects to raise (an extra $1 million this year). But we were quickly sidetracked. Turns out, reaching new audiences through music is just a tiny piece of Patagonia's ever-expanding repertoire of business innovation.

Why not take a cut from the Music Collective?
We're making all the revenue we need. We're not interested in making more money--we're interested in saving the planet. Actually, the Board didn't want to do it at the last meeting. But we did it anyway.

Is that good business?
It's not going to hurt our image, that's for sure. It's good business to spread the word to new customers. This is going to appeal to a lot of young people.

Some artists want to record tracks in your old tin blacksmithing shed. Are the acoustics good?
The acoustics are horrible! It's funny that people like it. I did an interview there the other day. They sent a supermodel, and I thought, "What is a supermodel doing in a place like this?"

You've been busy. I heard you gave a speech on sustainability at the 2011 Seafood Summit.
There's no such thing as sustainable seafood anymore, because all fish are in danger. So we're going to build a processing plant in British Columbia and start our own little entrepreneurial business with wild Pacific smoked salmon and jerky. Our difference is we're getting local people to catch fish in rivers, so we'll know exactly where the catch comes from.

A new division of Patagonia?
Yeah, Patagonia Provisions. I've been wanting to get into food. The fish come the first week of August, so we're probably going to have something out in the fall.

What else is going on?
The biggest thing we've ever done: We developed a sustainability index for clothing, in alliance with Wal-Mart and companies that represent more than half of the apparel sold around the world. It gives retailers information about how products are made, and the customer can make the ultimate decision. What we're setting up could be applied to every product someday.