Jonathan Blum
April 15, 2011 min read
Opinions expressed by Entrepreneur contributors are their own. 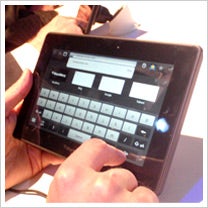 After nearly six months of talking it up in the media, struggling Canadian smartphone giant RIM is nearing a release date for its tablet PC, the BlackBerry PlayBook. At just 7.6 inches long, it's blissfully small, but pretty darn fast -- at least for core features that would appeal to the typical small-business user. With 16 GB models starting at $500, PlayBook is in pre-orders now at Best Buy and set for release on April 19.

I first demoed a prerelease PlayBook in January at the Consumer Electronics Show in Las Vegas. And I got a look at the final unit that will ship next week at a press event in Chelsea last night.

My take? The device feels rushed to market and lacks key features, such as email, that most small-business owners would likely want for such a gadget to justify the cost. Waiting for these to roll out might be a better bet.

Once you figure it out, the PlayBook is fast and has many business-worthy features.

The PlayBook is based around BlackBerry's new operating system called QNX, which is set to become the backbone for other BlackBerrys in coming months. The QNX-enabled PlayBook offers some of the fastest and most robust basic business functions in a portable device. Tasks such as email, files and documents are managed with small sweeping touch gestures, like an iPad, but much faster. While getting the hang of the PlayBook can take some time -- menus, for example, can be odd -- once you get accustomed to the tablet, it can work for you.

The Playbook's most interesting feature is the BlackBerry Bridge, a Bluetooth connection that fetches the email, calendar and address book from nearby BlackBerrys and puts them on the PlayBook. The feature can turn unit into second display that in some cases can replace a laptop.

Other business "gimmes" are tossed in. For example, a HMDI connector that supports a PowerPoint feed to, say, a projector and a drag-and-drop feature that makes adding files to iTunes-like content services easier. Add in the fab-looking screen and small size, and the PlayBook definitely has mobile small-business skills.

What isn't so cool:
There's no email, calendar and address book suite available for the PlayBook. An app is expected to be delivered wirelessly later this year. But as of now, to do your work email with the PlayBook, you need to have a separate BlackBerry and then connect it using the Bridge system.

Somehow, it appears that this critical piece of small business software is not yet available as of this launch. You might think it crazy, but it's true.

Bottom line: Until RIM gets the basic business functions up and running on the PlayBook, it isn't ready for small-business prime time. When a legit office software client finally ships, then it might be worth a look.

Until then, get another unit.

The No. 1 Reason You're Not Experiencing Consistent Revenue in Your Business