How three moms started small businesses around solutions to parenting challenges.
Next Article

Jennifer Merritt
May 6, 2011 5 min read
Opinions expressed by Entrepreneur contributors are their own.

The old axiom that necessity is the mother of invention is particularly true -- and can be profitable -- for inventive moms who build businesses around solutions to parenting dilemmas. But moving from inventor to full-fledged entrepreneur takes time, perseverance and, yes, money. Consider the journeys of these mompreneurs who launched inventions while taking care of their kids practically full-time.

When Christine Moss found herself struggling to keep up with a toddler while pregnant with her second child, snacks inevitably ended up on the floor. She wondered why nobody had created a spill-proof snack cup. "It couldn't be that hard," she thought. So Moss, now 47, decided to invent one using heavy vinyl from a fabric store, a hot glue gun and a basic cup. The Snack-Trap was born.

A few months later, the former insurance and risk-management professional shared several prototypes with a day-care center. The test was a success. The cup's vinyl lids had openings wide enough to let little hands reach a snack, but still keep food in the cup. Moss secured about $100,000 in bank loans to launch her company in 2003, and worked from her garage for three years. Last year, she sold nearly 1 million Snack-Traps through retailers, including BuyBuy Baby and Toys 'R' Us, at a retail price of about $5 each. Annual revenues were nearly $2 million in 2010.

Moss's Advice: Research pricing. By first determining the price point for SnackTrap, Moss worked backwards to figure out the profit per cup and how many cups she'd need to produce to make money. 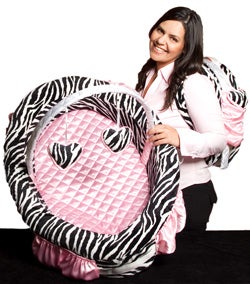 Pazit Ben-Ezri, founder of LulyBoo LLC and inventor of the Baby Lounge.
Photo courtesy of the company

In 2006 Pazit Ben-Ezri's 3-month-old son Ronnie often couldn't sleep unless he was in his crib. But with a family always on the go, Ben-Ezri found that putting Ronnie down for a nap at home was nearly impossible. "I had gotten to the point where I didn't go out because of this," says Ben-Ezri, 33, who had been a nursery-school teacher. So Ben-Ezri decided to make a small cushion with handles that fit in Ronnie's crib, but could be removed to take him on errands. She drew sketches, taught herself to sew, and created the first Baby Lounge, a foldable bed that can be worn like a backpack.

Everywhere she went, Ben-Ezri fielded comments from moms who wanted the "backpack bed." She gave away several prototypes in exchange for feedback and incorporated changes, such as a waterproof bottom and a sun canopy. But it wasn't until attending her second juvenile products trade show in 2009 that Baby Lounge took off.

"The buyers need to see that you are serious," says Ben-Ezri, noting that it still took seven months of negotiatons after the show before securing her first deal. She got orders from Target.com and BabiesRUs.com for the $75 Baby Lounge. To date, Ben-Ezri has sold tens of thousands of Baby Lounges and began turning a profit this year, although she declined to disclose revenues.

Ben-Ezri's Advice: Go out of your way for feedback. Ben-Ezri offered prototypes of her product in exchange for feedback, which became critical in product development. And she walks store aisles to watch how customers react to the travel bed.

Related: Five Steps for Getting Your Business Up and Running 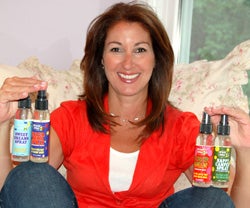 When Debbie Glickman's 3-year-old son was moving to his "big boy" bed in 2005, he was anxious. He would wander into Glickman's room to sleep or insist his parents lay with him until he fell asleep. Glickman wanted a better way to soothe him.

"I knew lavender was one of those scents that was calming and soothing," she says. So the former advertising executive spent $20 on a tiny bottle of lavender linen spray. "I said I found this spray that would give him good dreams and keep the monsters away. He would inhale [the scent] from his pillow and feel calmer."

Glickman, now 43, knew her idea could be a business. The mother of two wanted to work again once her children were in school, so two years later she made the leap. She researched common childhood fears, including separation anxiety and spooky dreams, and matched them with soothing, natural scents. Glickman wanted to develop calming sprays linked to a story and fun character.

Storytelling Freddy the Frog was born and Fairytale Wishes Inc. incorporated in 2008. About 10 months and $20,000 of her own money later, a few local stores carried the product. Each aromatherapy spray -- with whimsical names such as Super Hero and Monster Repellent -- comes with a hang-tag story. Revenues in 2010 were about $24,000, up from just over $10,000 in 2009. This year the product is being tested in several Bed Bath and Beyond stores.

Glickman's Advice: Go with your gut. "If something doesn't feel right, then it's not," says Glickman, who recalls once being talked into paying $2,000 in showroom fees that resulted in just four orders. She also suggests telling as many people as you can about your company. "I found people were very eager to help me," Glickman says. "You never know who has a connection or an idea."

Related: The Idea Phase of Starting a Business