How to Make Working at Home Work: A Banker-Turned-Entrepreneur's Story

Coffee News owner and CEO Bill Buckley left the financial industry to start a Coffee News franchise out of his home.
Next Article 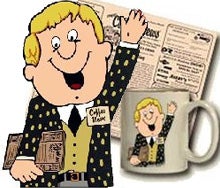 "I really didn't want a 'real job.' I wanted to work for myself," Bill Buckley recalls. "And I loved working from home."

That was 1995, after Buckley had spent 25 years in the banking industry. He did a 180 to become the first U.S. franchisee of Coffee News, working out of two rooms in his home in Bangor, Maine, to produce free weekly newspapers for local restaurants.

A lot has changed in 16 years. Buckley went from franchisee to U.S. sub-franchisor in 1996, and to owner and CEO of the entire company in 2008. But one thing hasn't changed: He's still working from home.

"It gives me the flexibility to do all the other things I want to do in my life," Buckley says. "I work whenever I have things to do, and when I don't, it's all free time."

Being able to skip the commute and make his own schedule means more time playing tennis, golfing and going to car shows with his wife, Coffee News vice president Sue-Ann Buckley.

But that doesn't mean being a home-based franchisor is all play and no work. "I work just as hard--if not harder and longer--here at home than I would if I were in an office," Buckley says. "We have close to 400 franchisees around the world, so I have 400 bosses. When they call, I sit up at attention. You have to be responsive."

Buckley makes sure his 400 "bosses" get all the same support a non-home-based franchisor would provide. Every eight weeks he takes over a local hotel to offer new franchisees a three-day training session. After that they're assigned a mentor and given a free website, software package and access to an online chat group so they're never on their own.

"It's all perception. My office tower today is my web page," Buckley says. "When you call, you don't know whether you're calling an office building in New York City or a farm in the middle of nowhere. That's the new normal."


Success at Home
Some words of advice from Donna Partow, author of Making Money from Home: How to Run a Successful Home-Based Business

What are the advantages of working from home?
One of the great advantages is the tax savings. The average person can save about $2,800 a year on their taxes just by virtue of having a home-based business. The other advantage is the ability to balance family and career.

How do you achieve that work/life balance?
It's critical to have a distinct and separate space for your business. When you're in that space, you're working, and when you're out of that space, try to leave work behind.
It's also important to establish accountability. One advantage of connecting with a larger organization like a franchise is that it gives you structure and people with whom you can connect, set goals and establish accountability.

What about marketing?
Harness the power of social media: Twitter, Facebook, blogs, online stores. Nowadays someone working out of their home can present just as powerful a marketing front as a company with thousands of employees. And don't forget YouTube--people want to see and hear information, not just read it. Home-based entrepreneurs actually have a competitive advantage over big corporations in this area, because slick video productions are viewed as unwelcome advertisements, whereas a homespun information-packed video is considered more trustworthy.