A New Source of Support and Inspiration for Young Entrepreneurs

Adam Toren
Serial entrepreneur, mentor, advisor and co-founder of YoungEntrepreneur.com
home menu_book
May 18, 2011 min read
Opinions expressed by Entrepreneur contributors are their own. 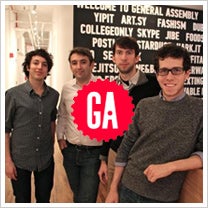 How can the U.S. government encourage entrepreneurship among the young?

That was the question that various government entities along with Small Business Administration and partner organizations posed to a veritable who's who of young entrepreneurs in front of a packed audience at the General Assembly Incubator in New York and online yesterday evening. Although small businesses overall could likely use a hand up from Uncle Sam, the stated purpose of the event was to get feedback and answer questions of young entrepreneurs to better help the Administration support small business growth -- specifically among young entrepreneurs.

SBA Deputy Administrator Marie Johns painted a stark picture about the state of small business and young people in particular. While national unemployment rate hovers around 9 percent, over 26 percent of the nation's youth remains unemployed. She added that the plight that young people face in America today is simply unsustainable. Her solution? Young people should work for themselves. Not only will successful young entrepreneurs create their own jobs, they’ll create more jobs, and then the cycle we’re caught in can finally slow and perhaps reverse. Johns also took the opportunity to announce the new Young Entrepreneurs section of the SBA’s website, at: sba.gov/youngentrepreneur.

To ponder this question about how to bring more young people into the fold, the Administration called upon, well, young entrepreneurs. The panelists on hand included Alexis Maybank, co-founder of flash-sale fashion site Gilt Groupe; Ntiedo “Nt” Etuk, founder and CEO of educational video-game maker Tabula Digita; Rachael Chong, founder and CEO of volunteer staffing firm Catchafire and Mason Fuller, founder and CEO of medical-equipment seller Atlas Frontiers, who is the SBA’s 2011 Young Entrepreneur of the Year.

Here are their best kernels of advice:

What do you think would help encourage more young people to take up entrepreneurship? Leave a comment and let us know.

-Adam Toren is co-founder of YoungEntrepreneur.com and co-author of Kidpreneurs, a book about the basic principles of entrepreneurship for kids.