By Mikal E. Belicove May 26, 2011
Opinions expressed by Entrepreneur contributors are their own. 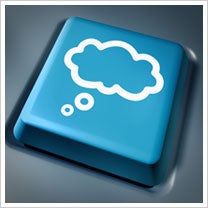 The topic of cloud computing has had its share of ink lately, some of it good, some of it not so good.

On the positive side, Apple is negotiating with record labels to allow consumers to upload and store music purchased on iTunes, online via the cloud. If approved by the record labels, Apple will provide access to cloud-based servers as part of using iTunes, thus eliminating the need for customers to store music locally on a computer’s hard drive.

On the not-such-good-news side, Amazon’s EC2 cloud-based servers went down late last month, temporarily knocking out access to many popular web-based services, including Foursquare, Reddit, Quora, BigDoor and Hootsuite.

Regardless of how prevalent cloud computing is, the concept of using shared servers to access everything from documents to software appears foreign to business owners -- a troubling finding as added services go to the cloud.

Indeed, 72 percent of decision makers at small- and medium-sized businesses, either don’t have a clue as to what cloud computing is, or they’re not familiar with the technology, according to an April survey of 525 company founders, CEOs and managers called Cloud Computing and the Role of IT Professionals in Small- to Mid-Sized Businesses by the San Francisco-based online surveyor Zoomerang.

Based on these survey results, it seems a primer on cloud computing may be in order. A model for enabling convenient, on-demand access to a shared pool of computing resources (e.g., networks, servers, storage, applications and services),a cloud computing regime can be rapidly set up and released with minimal effort or service provider interaction, according to the National Institute of Standards and Technology.

In other words, cloud computing gives you instant access to additional memory and services without having to download a thing.

Still confused? Consider this: It used to be that the only way to use QuickBooks accounting software in your business was to purchase and install it on your computer. Each time Intuit, QuickBook’s parent company, released a new version of the software, businesses had to purchase and manually upgrade it on their computers.

Many business owners believe cloud computing already is the next big thing to hit the Internet. Web-based email and online customer relationship management (CRM) and project management tools are just the tip of the cloud. As reported by Ericka Chickowski in the June 2011 issue of Entrepreneur magazine, Swiftrank -- an online global travel network -- uses Amazon’s cloud-based servers to “ramp up bandwidth to accommodate future growth and expansion,” which isn’t something the company could do as effectively with a traditional web hosting schema. “We were having some challenges during peak traffic periods,” Swiftrank president Sue Heilbronner tells Chickowski. “That problem was solved almost immediately,” Heilbronner reports, by moving her company’s websites into the cloud.

Are you holding back from transitioning to the cloud? Let us know why in the comments section.

Why Is The Airline Industry So Concerned With The 5G Network?

In the Big Tech Metaverse, is privacy an option?