Planning a wedding can make even the most well-adjusted couple a little crazy. There's so much to do, from finding a stunning location to choosing the perfect flowers and booking an amazing caterer … the list never ends.

Enter Phyllis Hong Cheung, founder of San Diego-based My Wedding Concierge, a website and iPhone/iPad app that aggregates and curates wedding blogs to help high-end couples streamline their search. "Our focus was to create a wedding search engine that was visually stunning and visually driven," she says.

Lessons Learned
For Phyllis, finding that focus--as many entrepreneurs often experience--was the result of a failed first attempt. In fall 2008, she and her husband, Philip Cheung, were figuring out their next move. She was pregnant, and he was about to be laid off from his job at Pfizer. "We got together and brainstormed a lot," Philip says. "Phyllis was on bed rest and bored out of her mind."

So they came up with a way to combine her wedding marketing consulting experience and his background in scientific computing and bioinformatics. The result, launched in September 2008, was a wedding vendor directory iPhone app, with software designed by Philip. Though it was the first vendor directory app in the iPhone market, it soon became clear it wasn't working. So the couple scrapped the business model and started anew, looking at how to make a product that would stand out.

"We talked to a bunch of brides and found out where they were getting their information from--and it was always the top three wedding blogs [Style Me Pretty, Wedding Chicks and Weddingbee]," Phyllis says. "So we're thinking, there are over 4,000 wedding blogs out there and most of them aren't getting any traffic. We decided to look into blog search engines, and the ones out there were aggregators, but not curators."

Thus, My Wedding Concierge was born.

The Investment
The Cheungs initially put $4,000 of their own money into the business, funded from Philip's severance package. The rest they've bootstrapped themselves. For now, the staff consists of the two of them (Philip has a full-time job and can only work nights and weekends), plus a marketing intern and three sales reps.

Their free app, which gets downloaded 600 to 1,000 times per day, is an "inspiration engine" that delivers thousands of wedding inspiration boards and wedding planning articles based on search terms the user submits. A user's online account, also free, syncs with the app so all research, bookmarks and favorite sites are in one place. 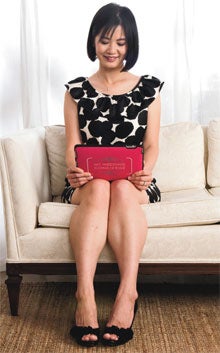 So who are these brides- and grooms-to-be looking for inspiration? They're in their mid to late 20s, higher-end and they know what they want, Phyllis says. They're searching for the luxury vendors--like Monique Lhuillier gowns, she says. "They're not just looking for flowers, they want peonies."

Besides the what couples want, gleaned from user search terms, the Cheungs can also see the where from MWC's site traffic (which is global), giving them the ability to predict trends and to market in specific areas.

The site has been monetizing for a little more than six months through its advertising platform, Ad Concierge, which completely integrates ads that look like search results. "We're capturing a significant amount of traffic and are able to redirect to smaller companies who may not have had a chance before," Philip says. "It's really satisfying."

And, apparently, effective: The Cheungs boast a click-through rate of nearly 70 percent. Prices range from $50 to $150 per month for local advertising; national ads range from $200 to $500 per month. Blogs can be indexed on the site for $1,800 a year.

As for MWC's own marketing and PR, it's all done by Phyllis, who made the "$4,000 mistake" of hiring a PR firm early on. Though she had many professional contacts from her previous consulting company, Phyllis uses social media as her main marketing tool, which has given MWC plenty of exposure.

Tweeting to Success
It's been through the company Twitter feed (@iwedding) that Phyllis has effectively networked and identified a core set of vendors to be part of the search engine. "The people who were on Twitter in the wedding industry were tech savvy and knew social media would be the next big thing, and that was exactly where I found myself," she says. It's also given her the freedom to focus on her two children while continuing business and networking conversations online.

She sticks to the 10:1 rule--tweeting about everyday topics and answering questions 10 times for every one time she promotes her business. "I've basically met everybody that has been a connector for me on Twitter," says Phyllis, who has organically grown her Twitter following to top 6,000 in less than two years.

Revenues for 2011 are projected to reach $720,000, and there are plans to expand outside the wedding world.

"The idea is that not only can we grow in a domain like weddings, but we can also expand rapidly across multiple domains like travel, luxury and automobiles," Philip says. "Any industry that has a specific set of blogs and really rich content, we want to be part of."

Why Positioning Is More Important Than Ever