Five Dos and Don'ts for Businesses on 'Empire Avenue' 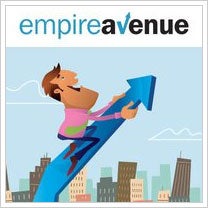 Last week, I wrote about Empire Avenue, the "social media exchange" that enables players to buy and sell virtual shares in another person or business or brand. With an expanding user base, the game helps players monitor their social influence and garner business-related connections that may lift sales and boost their bottom line.

This week I chatted with representatives from two of the largest conglomerates on the real New York Stock Exchange about their participation in Empire Avenue. That’s right. Both Ford Motor Co. and AT&T established themselves on the site two months ago. While they’re new to the game, check out their stats:

Since both of these fledgling Empire Avenue companies experienced fast success on the platform, I asked them to offer some dos and don’ts for other business leaders who may be considering using Empire Avenue as well. Here are a few of their suggestions:

Don’t ‘game’ the system: “Acquiring investors and followers just so you can increase your brand’s share price isn’t a sustainable practice,” says Monty. He suggests that more seasoned Empire Avenue players can sniff out inauthentic behavior quickly. They also aren’t shy about pointing it out.

Do respond in-kind: Baccus recommends that if someone purchases shares of your business or brand, give them a “shout out” and consider buying their shares. “Authentic reciprocity is a big part of Empire Avenue,” he says. Baccus also recommends responding in-kind to those who mention your brand on the site. “Follow up with everyone who engages with your page.”

Don’t forget to reward: Think about giving something of tangible value to players who take the time to invest in and evangelize your brand. Aside from purchasing their shares, Ford's Monty recommends those with a brick and mortar or ecommerce operation should consider offering a discount code or coupon as a beneficial way of saying thanks. Monty also suggests profiling or featuring one investor each week by means of a "Shareholder Mail" message. This rewards a person for their exemplary support by encouraging other players to invest in that person.

Do join communities: That’s why they’re called “communities.” AT&T’s Baccus says he responded to a player’s post about his company’s service, which drew a stunned response from the poster when he realized a company as large at AT&T replied to his query. This quickly established AT&T as a bona fide and trusted member of the community.

Don’t opt out -- register your brand: As an aside, Randy Gage, author of Why You're Dumb, Sick & Broke...And How to Get Smart, Healthy & Rich!, says that even if you have no intention of ever putting your business or brand on Empire Avenue, you should still go to the site and secure your business or brand ticker before someone else does. Better safe than left out of the game, he says.