How Gamesalad Can Help You Create Your Own Video Game

This Austin company can turn almost anyone into a game developer.
Next Article

It's one thing to post a few cute animal videos on YouTube or populate a Facebook page with photos and status updates. But it's something else to think that anyone can create video games. Or is it? That's a bias GameSalad, an Austin, Texas-based video game development company, is trying to turn on its head.

Michael Agustin and friends Tan Tran and Daniel Treiman founded the company in 2007. Each had great jobs in the tech field--with collective experience at Apple, Edge of Reality, Hotels.com and Epic Systems--and Agustin had earned a master's degree in entertainment technology from Carnegie Mellon as part of the video game development curriculum led by the late Randy Pausch, author of the bestselling book The Last Lecture. But the drum beat of "user-generated content" and the success of companies like YouTube left the trio wanting more. Together, they had the resources needed to develop and launch a platform to share their interest in game development with the masses.

They decided to move to Austin, a creative city with a low cost of living where their less-than-$20,000 self-funded startup capital would go further than in Silicon Valley. Launched as Gendai Games (the name change to GameSalad came in 2010), the company offered an easy-to-use platform with drag-and-drop features, allowing anyone with minimal gaming and computer skills to become a developer.

When they began to seek funding for their efforts, initially they came up empty. "Austin doesn't have a great depth of VC presence," Agustin says. "There was a local angel network and we got accepted based on the idea."

But the loose collection of attorneys, doctors and real estate investors just weren't "getting" the concept. The trio even presented at mega-conference South by Southwest (SXSW) Accelerator in 2009. 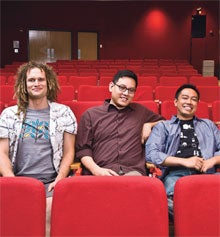 "We liked the team," Laskey says, "and the ability to have a low-cost platform where creative individuals can come in and rapidly prototype and then actually publish their games was really exciting."

Apparently, the platform was also impressive for its quick adoption: Before that SXSW appearance, it had hundreds of users. Today, Agustin reports, more than 150,000 people have downloaded the tool, including a nurse whose GameSalad-based games sold so well she now has a game development studio of three people.

Laskey and his team led a $6.1 million round of funding that closed in March with participation from other VC firms Greycroft Partners, DFJ Mercury, DFJ Frontier and ff Asset Management. In November 2010, GameSalad brought on Disney veteran Steve Felter as CEO. Agustin says Felter was instrumental in landing the funding.

The money will be used to further develop the software and add applications and features that will appeal to professional developers, Agustin says, by "bridging the gap between traditional programming languages and GameSalad."