All the Right Moves

These franchisees packed up their homes and their previous careers to pursue small-business success in new cities
Next Article Add to Queue
Jason Daley
Magazine Contributor
June 21, 2011 9 min read

After retiring from Cisco Systems and spending several years working as a private technology consultant in the Denver area, Stan Kramer was ready for a low-tech investment. A friend who had been an angel investor in the quick-serve burrito franchise Qdoba couldn't stop talking about the money he was making from the restaurant. Kramer liked what he was hearing and bought into the concept in 2004.

The problem was, there were no territories left near his home, so he opted to open six stores in and around Portland, Ore.

"I thought it would be a passive investment," he says. "I thought I could hire a guy in Oregon to run things, and like my friend, make lots and lots of money."

Things didn't quite work out as planned. During his quarterly visits to Oregon, he observed that there were tons of customers and that the employees seemed motivated. But after four years and several hundred thousand dollars invested, the stores still weren't breaking even. Kramer discussed the situation with his wife, Jeanie, and considered cutting his losses. Instead, he decided to make one last push: He would go to Oregon for 90 days, and if he couldn't steer the ship back on course, he'd give up the investment.

Before heading out, Kramer enrolled in a Qdoba class for owners--something he'd neglected to do as an absentee franchisee--and spent two weeks behind the counter, scooping out avocados, chopping tomatoes and grilling chicken. He learned everything the company teaches managers, from scheduling employees to turning over food.

"It made all the difference in the world," he says. "Before, when I'd go into my stores, I'd stand and look around and say ‘Something's wrong here,' but I didn't know what. When I came back from that class, it was like spraying Luminol on a crime scene. I could see the blood spatter everywhere. I'd see people doing things wrong and say, ‘You can't do that!'" 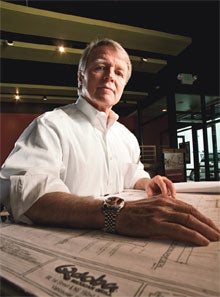 While in Oregon, Kramer implemented Qdoba's best practices and wrote a business plan for each of his stores. He changed some managers and assessed the strengths and weaknesses of each unit. And during that three-month business trip to salvage his investment, he also realized something much bigger: If he was going to make his franchises work, he couldn't rely on phone calls to people 1,000 miles away. He was going to have to move to Portland.

While most franchisees don't have the luxury of being absentee owners, they do often face a choice similar to Kramer's. For many reasons, franchisees may opt to move to a different city or state--or sometimes country--to open the concept they're interested in.

There are no statistics on how many people relocate to start their businesses, but some franchises actively encourage motivated candidates to relocate to new markets, sometimes even offering incentives, such as moving fees or reduced royalties. The franchise gets a qualified candidate in a key region, and the franchisee gets virgin territory with a greater chance of success.

Doug Schadle, a partner at Rhino 7 Franchise Development Corporation in North Carolina, says moving to open a franchise is fairly uncommon, but that more and more people are opting to relocate from depressed markets to greener pastures. He cautions, however, that leaving your home turf and network of contacts can make opening a business that much harder. On the other hand, there are scenarios that make sense.

"If quality of life is the main reason you're moving and you're going to where you want to spend the rest of your life, that makes sense," he says. "Sometimes people get enamored by a certain franchisor, but all the territories are sold out. Maybe they should relocate."

That's why Chris Mecklem made the move away from Fort Collins, Colo., last February. Mecklem has been a partner in a radio-tower painting business for several years, but the lucrative work only lasts about four months of the year. Having eight months off was driving Mecklem crazy, so he began searching for a second business.

When he found the Oxi Fresh carpet-cleaning franchise, he was impressed, and the concept fit his budget. But when he went to the company's Discovery Day event, he learned that all the territories in Fort Collins and most of Colorado were already sold. Mecklem sat on the idea for three months and scouted other businesses, but he kept coming back to Oxi Fresh.

"In that three months, I rode around with an Oxi Fresh technician several times in the Fort Collins area and talked to several customers, asking them why they chose Oxi Fresh," he says. "They were enthusiastic, and I got to be more and more impressed. In the field is where the true opinions come from. With all that information, I decided to give it a shot."

That meant leaving the state he loved. He looked at San Antonio, but didn't feel Texas was the right fit. Instead, he settled on Las Vegas, and the move seems to be paying off.

"The first month was a struggle, and I didn't do the numbers I expected," he says. "But now I'm a lot busier and I'm even turning a small profit, which I didn't think I'd see for a year or two."

Franco Gelsomino made his move on New Year's Day 2010. After 11 years in Southern California working in the financial and real estate industries, he wanted to open his own business. But he was not happy with the business climate in California and was wary of the state's massive deficits. He wanted to leave, but also knew he wanted to stay west of the Rockies.

"I did extensive research and realized Idaho and the southwest part of the state were a good match for me and my goals," he says, noting that he believes Idaho is one of the most business-friendly states in the nation, ranked fifth by economic think tank the Milken Institute. He set up his Right At Home senior-care franchise in the Treasure Valley, which stretches between Boise and Caldwell and is home to half a million people.

Not only does Gelsomino believe that the quality of life is much better in Boise, he feels like he has plenty of room to grow. "Half a million people, which is a quarter of the whole state's population, may sound like a small area to some, but actually it's not," he says. "This community continues to grow, and people from the coasts keep coming here to get out of the urban mess. It's been ranked one of the 10 best places to live by Outside and Forbes."

In October 2009, Bill and Gayla Clark packed up their home near Atlanta and moved to Birmingham, Ala., to open their Primrose School educational childcare franchise after seeing how much their grandchildren liked it. Not only was it the closest territory they could find, but Primrose paid their moving fees. There were other advantages: Another daughter lived nearby, and Birmingham's size was more comfortable for the couple, who originally moved south from Rochester, N.Y.

"Atlanta had its challenges," Gayla says. "Birmingham is more similar in size to Rochester, and I feel even more comfortable here than I did in Rochester. The atmosphere and people are both great."

Of course, moving to a new area can be stressful. Add to that the uncertainty of starting a small business and the long hours such a venture entails, and the whole thing can be a trial by fire. For Stan Kramer and his wife, Jeanie, it was particularly difficult. They both had strong ties to the Denver area, Jeanie especially, and it's taken time to put down roots in Oregon.

"It's taken two years, but we're getting there," Kramer says. "I am preoccupied with business, so I meet people like attorneys or brokers and I get a lot of social interaction that way. My wife had a huge, robust social life in Denver, and it's been challenging to replace that.

"We're older now," he adds, "and this is our first move without kids. When you move with kids, there's an instant social structure. When you move in your 50s, nobody cares. Our employees have become a big part of our social life. We really value that relationship."

For Chris Mecklem, a social life hasn't been at the top of his agenda. Moving to Las Vegas was not just a way to open an Oxi Fresh franchise, it was also a calculated risk. As one of the cities hardest hit by the recession, he went there knowing the economy was depressed. But he figured if tourism ever picked back up, Sin City might return to the 20 percent yearly growth it saw in the early 2000s.

Bill and Gayla Clark's move to Birmingham came with a big snag. Alabama has a unique law that prevents a childcare operation from advertising until they have completely constructed their building, gotten their state license and hired their staff. That meant the couple had only two weeks to drum up business before opening.

"We opened with only seven students," Bill says. "A school in Georgia that opened the week before had 100."

Luckily, the Clarks knew about the law and have recovered, but they say they're interested in working to get the rule changed in the future.

If things work out, a move can be rewarding personally, too, as it has been for Franco Gelsomino in Idaho. "The area is compact, and there aren't traffic issues, at least for someone coming from California," he says.

Kramer has no regrets, either. He's opening three more Qdoba restaurants this year and hopes eventually to open 15 to 20. One of his sons is moving to Portland to help out with the new family business. And best of all, his stores have reduced costs by 6 percent and increased sales by 20 percent.

"For me [the move] was a necessary thing," he says. "The improved performance of the stores has proven [that]. It was a challenge, but looking back, I'm really glad I made the decision."