This Boston brasserie has a private dining room favored by liquor-industry insiders, among other members of the city's business elite.
Next Article Add to Queue
Clare Leschin-Hoar
Magazine Contributor
June 21, 2011 3 min read 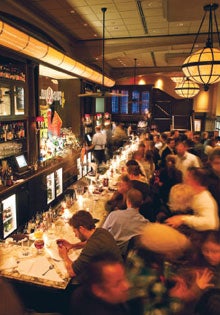 This bustling American brasserie tiptoes the perfect line between work and play--high ceilings, inviting red banquettes and a coaxing restaurant-length bar manned by some of the most skillful bartenders in the city. Not only do they know how to mix classics from a tasty Whiskey Smash to an elegant Pisco Sour, but spend a few extra minutes with your server and the history of each cocktail can be yours just for the asking.

Close proximity to Fenway Park and the adjoining Hotel Commonwealth has made the private room off the dining area a preferred spot for business meetings. The flexible space holds 18 when set up boardroom-style, with a full suite of amenities, including a drawdown screen, Wi-Fi and an iPod docking station. Close the doors and pull the curtains to maintain an air of privacy, or open them up to tap into the good energy flowing from the bar.

Red Sox brass and local pharmaceutical execs have held meetings here, but it's also where liquor-industry insiders choose to do business--including Pernod Ricard and William Grant & Sons (two of the top four drink conglomerates). Beverage execs aren't the only ones in the know. The private dining room also draws the city's top restaurateurs, who frequently leave the curtains open, making public any gossip that they're having lunch with a certain beverage person or a top-tier purveyor before launching a new dining spot.

Bar manager Jackson Cannon is known for the stellar beverage program here, so we recommend taking a pass on business-meeting traditional ice teas or Arnold Palmers. Instead, go for the array of very low- or no-alcohol selections. Our favorite? The Stormy Monday, made with ginger beer, spices, bitters and fresh citrus. "Though you know it's been a good meeting when they order a bottle of boutique champagne at the end," Cannon says.

How to Start Building Your Dream Career On Your Own

How the Crisis is Changing Consumer Behavior, and How Entrepreneurs Can Act on It

Why I'm Shifting to a Four-Day Workweek This Summer