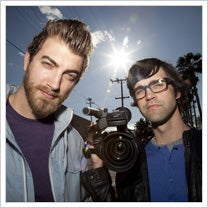 Finding customers has been the Holy Grail for businesses of all sizes. But for bootstrapping small-business owners, finding the cash not to mention the time to produce engaging and effective advertising can be a challenge.

That's where Rhett McLaughlin and Link Neal come in. Friends since grade school in Buies Creek, N.C., they are the stars of a new reality TV series on the IFC network called "Commercial Kings." Based on their popular YouTube channel, the program follows McLaughlin and Neal across the country as they produce wacky commercials for deserving local businesses. The show debuts Friday at 10 p.m., Eastern.

"We look for businesses that have a legitimate marketing need and wouldn't typically be able to afford their own local commercial," says McLaughlin, who is 33 (pictured, on left). "We usually work with businesses you've probably never seen a local commercial for."

Some of the businesses featured this season include a professional wrestling school, a taxidermist and a colonics "spa."

The show sprouted from McLaughlin and Neal's YouTube channel which has more than 750,000 subscribers. The idea originated in 2008 when the guys produced a spoof on local commercials called "Worst Commercial Ever," about a fictitious seafood warehouse in Boston.

"Our audience loved it," says Neal, also 33 (pictured, on right). "We were surprised to find out that many YouTube commenters thought the commercial was real. My Boston accent was horrible but Rhett's full-body lobster suit was pretty amazing."

A year later, McLaughlin and Neal partnered with a sponsor and started producing real commercials for real small businesses. At the end of production, each business is given its commercial to use in their own marketing efforts. But most just soak up the free exposure from McLaughlin and Neal YouTube channel (and, soon, from the IFC show).

"Two years later, we are still getting calls and people coming in just because they saw and loved our commercial," says Red House Furniture vice president Steve Patalano, who also managed to hawk "thousands" of commercial-themed T-shirts, coffee mugs and koozies. The video McLaughlin and Neal produced for Red House Furniture has been viewed nearly 3.4 million times on YouTube -- all without costing the business a dime.

For entrepreneurs who won't be fortunate enough to have their business featured on "Commercial Kings" (hint: McLaughlin and Neal say they're accepting suggestions on the show's Facebook page), the guys offer their three best tips for producing top-notch video advertisements on a budget:

1. Use the resources available to you.
Don't go out and spend a ton of money on unnecessary props. For the commercial they produced for the taxidermist, McLaughlin and Neal used a number of the display animals around the facility -- including a giant black bear and a rhino.

2. Feature the people behind the business.
The truth is not only stranger than fiction, but better, McLaughlin and Neal say. In an older commercial they made for a business called TDM Auto Sales, they learned that a salesperson had been a gynecologist when he previously lived in Cuba. So, they developed a concept around the salesperson -- a Cuban gynecologist and American auto salesman.

3. Have a strong point of view.
For an upcoming commercial featured in "Commercial Kings," McLaughlin and Neal were given a challenge by a black hair salon owner named Troy to make an ad geared toward white women, to bring them into his salon. "That's a message you won't soon forget," Neal says.

The advantages of telling your story to sell on the internet

Why you should let your employees be influencers