Advertise on Facebook? AmEx Has the Credit Card for You

By Mikal E. Belicove June 30, 2011
Opinions expressed by Entrepreneur contributors are their own. 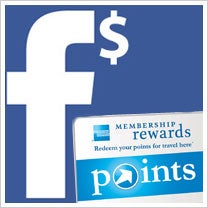 Forget miles and cash back, American Express is rewarding cardholders with Facebook Ads.

In what is being touted as a means for small businesses to attract new customers, AmEx announced this week that its Membership Rewards points can now be used to purchase advertisements on Facebook. And Facebook execs are all onboard, saying the program will enable the hundreds of thousands of small businesses who advertise on Facebook to have “a new and convenient way to pay for Facebook advertising.”

It'll also help owners use social-media advertising to tap into the more than 620 million people who use Facebook, says AmEx, which claims to be the first card issuer to tie its rewards program directly to advertising spend.

Both companies think the new reward offering will be a hit with cardholders. AmEx says 35 percent of small business owners use Facebook to promote their enterprises -- a figure that is up from 27 percent just six months ago. And both companies are actively pursuing ways to help businesses take advantage of the Facebook platform, most recently in the form of a contest called Facebook Big Break for Small Business.

While these efforts to further incorporate businesses into social-media networks are ambitious and commendable, I’m somewhat skeptical that tying a credit-card rewards program to paid advertising will really help small businesses. For one thing, it’s not all that easy to qualify for an American Express card -- especially if you’re an entrepreneur or a start-up business.

And with AmEx’s point-per-dollar redemption rate, you’d need to spend a whopping $6,750 on your AMEX card to earn a $50 redemption award for Facebook advertising. Put $13,500 on your card and you’d redeem only $100. Spend $33,750 and you get $250 worth of advertising on Facebook. But even that’s not going to buy you much of an ad. Especially when you consider that marketers worldwide will spend more than $4 billion on Facebook advertising in 2011, according to a report from eMarketer.

But if this rewards program interests you, here’s how it works: Small business owners who also possess an AmEx card can now access their Membership Rewards account and select the Facebook Ads denomination. Members receive a Facebook redemption code by email, which enables them to create an ad and enter the redemption code to pay. For more details on the program, visit facebook.com/open.

Would you use an AmEx card just to earn points toward advertising on Facebook, or is the cost of entry simply too high? Tell us what you think.