There's Something About Jack Dorsey

By Diana Ransom July 5, 2011
Opinions expressed by Entrepreneur contributors are their own. 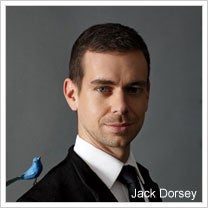 If top-dollar valuations are a trend these days, Jack Dorsey seems to have a knack for the projects that inspire them.

Twitter, the fast-growing micro-blogging site, is reportedly raising hundreds of millions of dollars in a new financing round that values the company at as much as $7 billion.

The move comes just days after Twitter co-founder Jack Dorsey's other business, Square, the credit-card processing app maker, announced that it raised $100 million in venture funding -- catapulting the company's valuation to around $1.6 billion.

Few details are known about who Twitter is hitting up for funds, as the company hasn't confirmed the news. But the Series C round Square reeled in at the end of June was led by venture capital firm Kleiner Perkins Caufield & Byers, which incidentally also backed biggies like Google. And just seven months ago, Kleiner Perkins led a separate round of funding that helped Twitter land $200 million when its valuation was just $3.7 billion.

Although, according to Mashable, Square helps process roughly $4 million worth of mobile payments every day and charges 2.75 percent per transaction, Twitter only recently started offering a way to advertise to its users.

Still, Dorsey and the rest of Twitter are aiming to generate billions of dollars in revenue from ads. That's likely enough to capture the attention of more than a few moneyed investors.

What is Jack Dorsey's secret? Let us know your thoughts in the comments section.

Traded Cryptocurrency in 2021? Here’s How to Approach Taxes