Are You a 'Horrible Boss'?

Carol Tice
Owner of Make a Living Writing
July 11, 2011 min read
Opinions expressed by Entrepreneur contributors are their own. 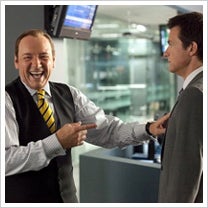 It's a sensitive subject for entrepreneurs, as many were inspired to start their businesses by a desire to get away from a nasty boss.

But...what kind of boss have you turned into, now that you're in charge?

The new movie Horrible Bosses has thrown a spotlight on an unpleasant fact: A lot of bosses are awful.

A new survey of more than 400 workers found nearly half had worked for an "unreasonable" manager, according to OfficeTeam, a staffing firm that commissioned the survey. Unlike the movie's plot -- in which three beleaguered employees set out to kill their bosses who are variously: a sex maniac (Jennifer Aniston), a bigoted environmental despoiler (Colin Farrell), and a manipulator (Kevin Spacey) -- most people afflicted with a bad boss learn to adjust.

Nearly 60 percent of workers in the OfficeTeam study said they stayed on the job, despite having a nasty boss. Only 11 percent quit immediately, without another job lined up. Another 27 percent planned their escape, finding another job first and then leaving.

The study identified five common types of bad bosses. Do you recognize yourself here?

What kind of boss are you? Leave a comment and describe your management style...if you dare.

The Secret to Sustainable Growth Is Identifying Trends Ahead of Time

10 Ways to Get Global PR Exposure

6 Steps to Successfully Run Your Business From Abroad

5 Things That Cause Reasonable Consumers to Abandon Their Shopping Carts

How Can I Overcome Imposter Syndrome?