A Texas designer uses her passion for sustainable living to strike out on her own.
Next Article 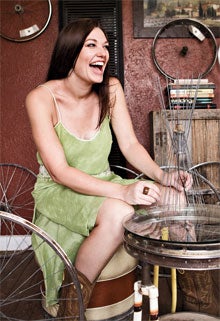 "Aha" moment: O'Mara created a table out of bicycle rims early last year to raise money for the silent auction at 24 Hours in the Canyon, an annual bike race in Amarillo, Texas, that benefits cancer research. That first table lit the spark; O'Mara continued designing and building furniture from spare bike parts and other recycled materials, including reclaimed wood. The self-proclaimed handywoman even taught herself how to weld. "I grew up in a family where we never hired anyone to do anything," she says. "I knew how to do a lot of home maintenance and painting, and I've always enjoyed upcycling old family furnishings."

Biker chic: O'Mara incorporates assorted bicycle parts into each work. One of her tables had a top made entirely of cut-up tires. Recently, she made a chandelier from wheels and rims for a restaurant in Portsmouth, N.H. 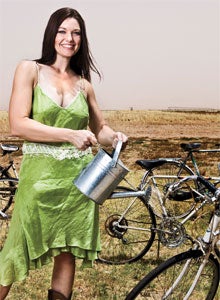 What possessed her: O'Mara wanted more fulfillment and more time to spend with her 4-year-old son, Tommy, than she had as director of sales for a hotel. So in August 2010 she and Tommy moved from Amarillo to her family farm in Robertson, where she builds her creations in the spacious barn. She initially invested about $2,500 of her own cash in the business. "I've been forced to adjust to a minimalist lifestyle, which in a way has been great, because it's really what I'm trying to encourage others to do," she says.

Customers: The cycling markets and green-savvy college crowd are into her designs, O'Mara says, and her Etsy site has been the main source of her buyers, who are mostly from metro areas such as San Francisco and Portland, Ore. So far, she's sold more than 65 designs, and lighting is her bestseller.

Marketing: With a Facebook page, blog and company website in place, O'Mara is homing in on the Etsy market, both stateside and internationally.

Why? O'Mara's aim is to educate people about environmental stewardship. "I feel like I'm doing something that is going to benefit the earth," she says, "but it's also benefiting our economy."