Diana Ransom
July 21, 2011 min read
Opinions expressed by Entrepreneur contributors are their own. 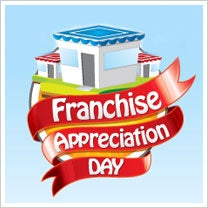 Do you really run on Dunkin? Is having it your way your thing? Quieres Taco Bell?

Franchise fans will get a chance on Sept. 3, Franchise Appreciation Day, to give thanks for the products and services they've come to rely on. And in return, they may even walk away with a freebie or two.

The day is the brainchild of Miami Beach, Fla., social-media marketing firm Sociallybuzz, whose clients include individual franchise owners and franchise systems. CEO Andre Kay is billing it as a way to raise the public's awareness of the role of local franchises in their communities.

"It's about connecting consumers with local franchises," says Kay.

He says many franchise systems either tamp down on franchisees' efforts to promote their contributions to their local communities or individual owners simply don't try -- thinking that they can rely solely on the franchise system's national advertising efforts.

Some "franchise facts" from FranchiseAppreciationDay.com:

Participating franchises, including Domino's Pizza and Jamba Juice, are expected to dish out free items like "Cinna Stix" or discounts on products to consumers who "check in" with Foursquare or Facebook Places at their establishments that day. More than 2,200 consumers have already signed up to patronize the more than 700 participating franchises on Franchise Appreciation Day, says Kay. He expects that more franchises and consumers will likely sign up after the campaign launches officially Monday.

For those who do sign up on the site -- though it isn't required to participate -- expect a reminder email to appear in your inbox about two weeks before Franchise Appreciation Day and possibly another one next year as Kay hopes to turn it into an annual event.

Until three years ago, the International Franchise Association celebrated its own Franchise Appreciation Day, the name once given to its annual advocacy event when franchise owners head to Capitol Hill for a meet-and-greet with U.S. Congress members. They opted instead for the decidedly less catchy Public Affairs Conference, says Alisa Harrison, an IFA spokeswoman.

Do you think local franchises need a day to celebrate them? Let us know if you plan to participate in the comments section.