Airbnb: From Scrounging for Rent to a $1 Billion Valuation

By Laura Lorber July 25, 2011
Opinions expressed by Entrepreneur contributors are their own. 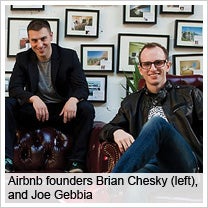 Still on the fence about launching that startup? Perhaps today's news about Airbnb may inspire you to action.

In 2007, roommates Brian Chesky and Joe Gebbia had trouble paying their rent. Today they announced that the business born of that need received funding that values their company about $1 billion.

The backstory: To raise the cash to pay their landlord, Chesky and Gebbia decided to rent out their San Francisco apartment to conference-goers seeking an alternative to hotels in their area. They pocketed $800. Then they built a business, Airbnb, helping other people do the same. Of course it wasn't a straight line to success. They struggled to break even, attended Y Combinator's startup bootcamp, eventually landed funding which helped them expand and now have more than 100,000 listings in more than 16,000 cities and 186 countries.

Here are three takeaways for would-be entrepreneurs from their experience thus far:

Does Airbnb's concept merit the $1 billion valuation? Leave a comment and let us know what you think.