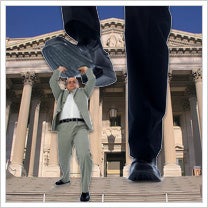 Billions of dollars in federal contracts that are intended for U.S. small business might actually be awarded to large companies -- and the Senate isn't happy about it.

Sen. Claire McCaskill (D-Mo.), chairman of the Senate Subcommittee on Contracting Oversight, said the SBA's system for tracking and qualifying companies for small business contracts "doesn’t seem to make sense." "We don’t need to be spending taxpayer dollars to prop up a system that allows the government to take credit and large businesses to profit at the expense of the small businesses that the system is meant to help," she said.

McCaskill argued that a complicated framework of regulations makes it "virtually impossible" to track the number of federal contracts being awarded to small businesses. The Senate investigation claims several large companies abuse special exemptions to the SBA’s size standards while others hold small-business contracts although they no longer qualify as small businesses.

According to small business advocacy group the American Small Business League, 61 of the top 100 firms on the SBA's Small Business Procurement Scorecards for Fiscal Year 2010 -- ranked by the total dollar amount of their federal contracts -- are in fact large companies. Some of the larger companies named in the report include Lockheed Martin, Northrop Grumman and Motorola.

In his testimony, Joseph Jordan, an associate administrator of the SBA's Office of Government Contracting and Business Development, defended the SBA's "rigorous analysis" and monitoring of the contracting data, saying his group's top priority is to "ensure that the benefits of our programs flow to the intended recipients."

Has your business ever tried to secure a federal contract? Do you think the system works? Let us know in the comments section below.