By Carol Tice August 8, 2011
Opinions expressed by Entrepreneur contributors are their own. 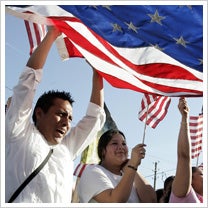 From Sergey Brin to Liz Claiborne, immigrant entrepreneurs have long been credited with creating some of the most storied U.S. brands and companies. With that -- and the nation's rampant unemployment in mind -- some business groups have recently called for relaxation of visa rules to encourage more business-owning immigrants to come to our shores.

New legislation was proposed to pave the way for entrepreneurial immigrants, but at present, it hasn't gone anywhere. In the meantime, the U.S. Department of Homeland Security's Bureau of U.S. Citizenship and Immigration Services is also taking up the cause.

Last week, the USCIS announced a policy shift aimed at helping more immigrant entrepreneurs start up businesses in the U.S. Rather than changing any laws, the Bureau hopes to achieve these ends simply by highlighting its existing policies. Through its newly published frequently asked questions document, entrepreneurs will see if they qualify for an "employment-based second preference immigrant visa" and learn about whether they're eligible for a National Interest Waiver.

If entrepreneurs can prove that their endeavor will benefit the U.S., for instance, this classification waives the existing rules requiring immigrants to have a job waiting for them in the U.S. and receive certification from the Department of Labor. Instead, would-be business owners in key industries such as technology will be able to apply on their own.

The hope is that these new businesses might spark additional hiring and economic expansion, at a time when unemployment has remained stubbornly high. There won't be changes to any current immigration quotas, however. The agency is just hoping to make better use of existing laws to enable more business-minded immigrants to get here faster. Entrepreneurs' applications will be fast-tracked under the new policy.

The USCIS's new tactics may face challenges in the Republican-led House, which has favored strengthening border protections between the U.S. and Mexico. But they'll likely have their work cut out for them, as a number of key players in the private sector are advocating freer immigration policies.

One organization that's come out in favor is the National Venture Capital Association. Apparently, VCs are chomping at the bit to invest in tech startups these new arrivals might create.

It remains to be seen how beleaguered U.S. business owners will react. Will they welcome the competition and new entrepreneurial brainpower or resent the move to encourage immigrants to come here to hang up their shingles?

How might your business be affected by fast-track visas for business-minded immigrants? Leave a comment and let us know.