Virginia Is for Wine Lovers

Here's a look at the nine wine regions in the Commonwealth of Virginia.

By Touring and Tasting August 16, 2011
Opinions expressed by Entrepreneur contributors are their own.

No matter what interests you, you're likely to find it--and lots of it--in Virginia. There are historical sites and storied towns for history buffs; horses and trails for equestrians; parks and nature preserves for hikers; lakes, rivers, and streams for anglers; orchestras and jazz bands for concert-goers; galleries and openings for art lovers; and plenty of magnificent wine for us all. In fact, the Commonwealth of Virginia is home to nearly 200 wineries and more than a dozen wine trails. 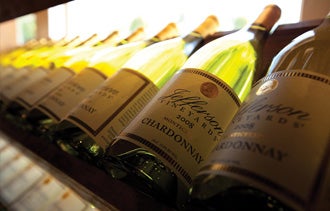 Virginia has been producing wine grapes and wine for almost 400 years. Thomas Jefferson, the author of the Declaration of Independence and the Statute of Virginia for Religious Freedom, third president of the United States, and founder of the University of Virginia, is also known as America's first distinguished viticulturist and the greatest patron of winemaking that this country has ever had. Although his determination to cultivate Vitis vinifera at his home in Monticello was never realized in his lifetime, he certainly paved the way for Virginia's wine industry today.

"Now, almost 200 years later, Virginia grape growers and winemakers are fulfilling Mr. Jefferson's dream," reports Virginia's First Lady Maureen McDonnell. "We have a better understanding of what grape varieties grow best here, and the winemaking and vineyard practices that are best for our climate--important information that Mr. Jefferson lacked. I think our best years are yet to come, and I believe that Mr. Jefferson would be very proud of the Virginia wine industry."

It's time we all get on board--let's tour, taste, and fall in love with Virginia and its outstanding wines. Here are nine regions to discover.

Blue Ridge Region
With the meandering Appalachian Trail to the west and the scenic Blue Ridge Parkway to the east, your eyes and palate are both in for a treat. The picturesque mountainsides of southwest Virginia are home to a number of well-established wineries thanks to the loamy, gravelly soil with good drainage at ideal elevations. Any of a large number of fine white and red wines can be tasted and purchased at Blue Ridge wineries.

Central Virginia Region
Thomas Jefferson was inspired by this land, and we are too. It boasts the eastern slopes of the Blue Ridge, rolling hills with fertile, granite-based clay soil, and a growing season of over 200 days, producing grapes with rich and multilayered Old World flavors. You'll find a bevy of wineries around Charlottesville, south of Lynchburg, and some closer to Richmond.

Chesapeake Bay Region
This historic Tidewater region of the Northern Neck and Middle Peninsula falls between the Potomac and York rivers, with the Chesapeake Bay to the east. The peninsulas provide sandy loam soil and a temperate climate year-round. Many wineries call this area home--and they, too, await your discovery.

Tour: Discover charming small towns dating back to Colonial times; walk a mile along the shoreline; take in a local museum; and stop at George Washington's Birthplace in Westmoreland County.

Eastern Virginia Region
Family farms, small towns, waterside villages, and miles and miles of pristine shoreline populate this peninsula between the Atlantic Ocean and Chesapeake Bay. The wine industry was born here in the early 1980s, thanks to the moderate maritime climate and long growing season.

Tour: Hit the beach; kayak to a winery; take a boat cruise up the Rappahannock River.

Hampton Roads Region
It's always tourist season in this U.S. historypacked region. There is so much to see, learn, and do, and among them are the wineries on the Lower Peninsula. The year-round temperate climate and fertile soil provide ideal conditions for a variety of grapes and the varietals they produce.

Tour: Browse through small town antique shops; find a favorite local diner for lunch; bring your mountain bike and follow a trail through one of two natural wilderness areas.

Northern Virginia Region
It's a beautiful drive to Northern Virginia, just west of Washington DC. There's fun and history in every direction. Known for years as horse and fox country, the rolling landscape is also ideal for wine grapes. The soils are rich from eons of granite and sandstone erosion, providing good air and drainage. Winters are moderate, and there's a generous growing season for vineyards.

Shenandoah Valley Region
This breathtaking valley, with its rolling landscape of pastures and historic towns, stretches from the Maryland state line to just south of the city of Roanoke. There are colleges (at least nine) in every direction. The valley's rocky, fertile soil, and warm, relatively dry growing season lends itself to nearly every varietal. You'll find wineries from north of Winchester to south of Roanoke and at points in between.

Tour: Poke around the Woodrow Wilson Presidential Library and Museum and several smaller museums; investigate Luray Caverns; see the Natural Bridge; and take a color drive in autumn when the leaves turn to dazzling colors.

Southern Virginia Region
This mostly rural and rolling landscape of farms and woodland provides the south-side Virginia version of small-town America. Rich in Revolutionary War, Civil War, and Civil Rights heritage, you'll bask in gracious Southern hospitality and warm temperatures. Combined with good soil, this climate is an incubator for many intriguing wines.

Virginia Wine Sampler
Taste the amazing variety Virginia has to offer. This is only the beginning.

Earlier this year, she oversaw the planting of 10 Chambourcin grapevines at the Governor's Mansion to honor an act passed by the Virginia House of Burgesses in 1619 requiring all Virginia landowners to plant ten grapevines and harvest their fruit. She hopes to have fruit for wines by the mansion's 200th anniversary in 2013. Mrs. McDonnell works hard to encourage restaurants, markets, and wine shops to carry Virginia wines.

"We are producing some outstanding red and white wines, with our Cabernet Francs, Petite Verdots, and Viogniers helping to establish the Virginia brand," she says. "Last summer I traveled with the Governor to England and hosted several events promoting our wines; and I am happy to report they were very well received."

Virginia Food Sampler
Take in a creative culinary class or food and wine adventure. Here are just a few.

Editor's Tip:
Get ready to celebrate Virginia Wine Month in October! October is a beautiful month to travel in Virginia and it's a great time to enjoy locallymade wines, fun festivals, and the colors and smells of autumn. For more information, visit virginia.org and virginiawine.org.