By Diana Ransom August 17, 2011
Opinions expressed by Entrepreneur contributors are their own. 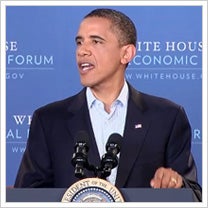 Like previous economy-boosting efforts that haven't caught on, the latest initiative out of Washington has some small-business advocates wondering whether it will peter out.

On day two of his three-day bus trip across America's heartland, President Barack Obama announced a new jobs proposal that's intended to give small businesses in rural America a kick-start.

While small business advocates are hopeful for the initiative, some worry that the program amounts to little more than lip service. "That's one of the problems with grand initiatives," says Thom Rhue, the director of entrepreneurship at the Kansas City, Mo.-based entrepreneur research organization, the Kauffman Foundation.

Among other measures, the President yesterday announced that the Small Business Administration would double the capital that the Small Business Investment Company program may invest in rural businesses to $350 million over the next five years. To entice accredited investors with existing investment funds to take a chance on rural businesses like wind farms and solar-panel manufacturers, the SBA says it will provide an up to two-to-one match on the private capital raised.

In addition, the SBA -- teaming up with the U.S. Department of Agriculture -- will attempt to connect private equity and venture capital investors with rural startups. The plan includes hosting a nationwide series of Rural Private Equity and Venture Capital conferences. Note that the Rural Council -- the newly established advisory panel led by the Secretary of Agriculture, Tom Vilsack -- defines "rural" as a city or town with fewer than 50,000 residents.

Still, doubts remain. Rhue compared this new proposal with the President's 2009 call to expand broadband technology across the U.S., which hasn’t yet materialized the hoped-for results. He notes that one of the biggest problems with the new plan is it relies on venture capital and angel investors to pony up funds for rural businesses.

That may never happen, says Rhue. "The old adage is, 'We invest in things we can ride our bikes to,'" he says, noting that investors tend to focus on more localized activities. "I'm a little skeptical about whether private equity will step up."

Rhue acknowledged that the government's two-to-one match may twist enough arms to work. But like the broadband initiative, only time will tell whether this new plan will succeed, he says. "The challenge is looking back and saying did we move the needle?"

What do you think about this plan? What's the best way to help expand entrepreneurship and jobs in rural America? Leave a comment and let us know.