Wine Success Stories Out of Oregon

The Beaver State has become famous for its vineyards. Here are just a few worth exploring.

By Touring and Tasting August 23, 2011
Opinions expressed by Entrepreneur contributors are their own. 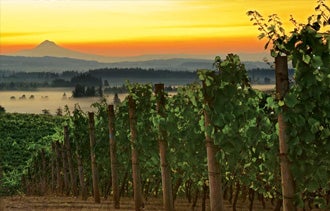 Just 40 years ago, there were only five wineries in the whole of Oregon. Today, the bountiful state boasts more than 400. Large or small, they tend to be approachable family-owned operations, with inspiring stories to tell. Here are some of our favorites.

Bill Hatcher, A to Z Wineworks/Rex Hill
Although he left the world of finance more than 25 years ago, Bill has managed to apply his expertise to his booming winery. After managing Oregon's Domaine Drouhin for 13 years, he and his wife Debra co-founded A to Z. He is dedicated to producing great, reasonably priced wines. His formula includes applying Old World practices while continually delivering on his promise of "Aristocratic Wines at Democratic Prices." He is also CEO of Rex Hill, where A to Z can be found in the Rex Hill tasting room, and owner of a small, private label, William Hatcher Wines.

Ted Gerber, Foris Vineyards Winery
Ted's career in wine began as a hobby of making homemade wine in college. He purchased hillside acreage in southern Oregon's remote Illinois Valley with a vision of planting a vineyard. For the first 15 years, he sold his grapes to neighboring vintners. In 1987, he released his first vintage of Foris wines. Today, Foris Vineyards is one of Oregon's top producers. A dedicated family man, Ted is quick to share his success with his family who work alongside him. The Gerber clan is said to go out of its way to be friends to their employees and keep everyone involved in the business.

Joe Dobbes, Wine by Joe/Dobbes Family Estate
With a small amount of money and a big dream, Joe Dobbes has built a very big wine company. In 2010 his company produced 119,000 cases of wine under two labels: Dobbes Family Estate and Wine by Joe. He has also built a reputation for being a good guy who got where he is by working hard. His winemaking philosophy of "nature, nurture, artistry" applies in the vineyard as well as the winery, which is certified sustainable. In addition, a field of wild lupin has been planted outside the winery to provide food for Fender's Blue Butterfly, native only to the Willamette Valley.

Ed King III, King Estate Winery
The word "success" is synonymous with the name of Ed's father, Ed King, Jr., who made a fortune in the small aircraft electronics industry. But Ed III's story is an intriguing one as well. In 1991, he already owned two small vineyards when he went to a ranch in the Lorane Valley to inspect some hay. Learning that the 600-acre ranch was also for sale, Ed knew he was onto something. The gently sloping terrain was in ideal proximity to the Oregon Coast--optimal for wine grapes. Ed created a first class winery and expanded it steadily. Today King Estate sits on 1,033 certified organic acres and produces an extensive portfolio. It is the largest winery in Oregon and one of the world's leading producers of premium Pinot Gris.

Scott Henry Sr., Henry Estate Winery
Originally an aeronautical engineer, Scott began growing wine grapes when he returned to his family homestead in the heart of the Umpqua Valley in 1972. His original 12 acres of Pinot Noir, Chardonnay, and Gewürztraminer did well in the rich soil and favorable climatic conditions. As the vines matured and developed, he experimented with different methods to maximize fruit quality, offset vigor, and minimize bunch rot. As a result, he devised the renowned Scott Henry Trellis system, a method now practiced in vineyards around the world.

James Frey, Trisaetum
One might say that Mother Nature led James to wine 15 years ago on his honeymoon, when he and his bride Andrea were snowed out of Yosemite. They decided to spend three days in the Napa Valley instead and James was smitten. He spent several years experimenting with a few vines of Pinot Noir and Riesling, and then bought land in the Willamette Valley to plant two vineyards. He has since built a state-of-the-art winery complete with a 1,500-square-foot art gallery that features his abstract paintings. James and Andrea are also the parents of two children for whom Trisaetum is named.

Rollin Soles, Argyle Winery
Hailing from Texas, Rollin Soles spent a summer in college in Switzerland where he worked for Hans Kesselring, a highly respected Swiss winemaker. After that, Rollin had no doubt about what he wanted to do with his life. He moved to California and attended the graduate oenology program at UC Davis. As luck would have it, his roommate hailed from Oregon's Willamette Valley and Rollin tagged along for a visit. He knew he was home at last. The Chardonnay from Argyle's very first vintage in 1987 was ranked among the Top 100 Wines of the World by Wine Spectator. Today, an unprecedented 11 Argyle wines have made Wine Spectator's Top 100 list and Rollin shows no signs of stopping. He also continues to be an effective advocate for the Oregon wine industry, helping to reinvent it by increasing the quality of Oregon's vineyards and wines.

Robb Bell, Cathedral Ridge Winery
When Robb bought Flerchinger Vineyards in Hood River in 2003, the winery was known for its Rieslings and Pinot Gris. But Robb had other ideas. He changed the winery's name to Cathedral Ridge Winery and, although he didn't abandon the Flerchinger legacy entirely, he got busy making red wines. For help, he went right to the top and hired Michael Sebastiani to be his winemaker. Since then, the wine awards have flowed freely. In 2007, Cathedral Ridge was voted Oregon Winery of the Year by Wine Press Northwest.

MORE OREGON SUCCESS STORIES
Janie Brooks, Brooks Wines
She has increased case production from 3,500 to 8,000 in the past six years, without sacrificing her late brother's high standards for quality.
Alex Sokol Blosser, Sokol Blosser
He spearheaded the development of six AVAs in northern Willamette Valley in 2002, and is now president of the Willamette Valley Wineries Association.