Labor Ruling Is a Reminder to Revisit Social Media Policies

By Mikal E. Belicove September 8, 2011
Opinions expressed by Entrepreneur contributors are their own. 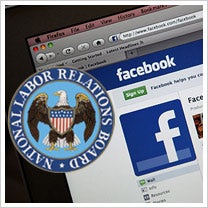 Providing guidelines on how employees should refer to work on social media sites is smart. But firing staffers for what they post about your company is a big no-no.

Employees who openly participate in a Facebook conversation about the terms and conditions of their employment -- including defending their job performance -- are protected under the Wagner Act (a.k.a. National Labor Relations Act).

A National Labor Relations Board (NLRB) administrative law judge ordered Hispanics United of Buffalo to reinstate five employees -- with back pay -- asserting the workers were unlawfully fired by the Buffalo, N.Y.-based organization. The decision is the latest in an increasing number of charges (14 recent cases) involving social media policies that have been submitted to the NLRB for resolution.

In four of the cases involving Facebook, employees were found to have engaged in protected concerted activity. In five other cases involving either Facebook or Twitter, the employees received no such protection. And in another five instances, some portions of the employers’ social media policies were determined to be too broad.

In the most recent case, Hispanics United of Buffalo, a provider of social services to Latinos living in western New York, was accused of unlawfully discharging five employees who defended their job performance online while being critical of the conditions under which they worked. The turmoil began when a co-worker -- an advocate for domestic violence victims -- was critical of another employee, claiming she wasn’t doing enough to help clients.

In response, the targeted employee asked four co-workers how they felt about the charge, and when they responded to her Facebook page posting, the employer fired those coworkers as well as the employee who sought the initial solicitation for comment. Hispanics United claimed those comments constituted harassment of the employee who first brought up the complaint about a fellow worker on her Facebook posting. That employee told the executive director that she considered her coworkers’ Facebook comments to be "cyber-bullying" and harassing behavior.

And while there was swearing and sarcasm sprinkled among the various Facebook responses, the administrative law judge found the conversation to be objectively innocuous. The Sept. 2 decision determined the employees' online discussion was "protected concerted activity" because it involved conversations among coworkers about their terms and conditions of employment, and those conversations included their job performance and staffing levels.

The judge ordered the reinstatement of the five employees with back pay. He also required the organization to post a notice at its facility concerning employee rights under the National Labor Relations Act.

I’ve written about several NLRB opinions and decisions regarding social media over the past year. This latest ruling further underscores my view that business owners and HR directors should keep pace with the NLRB when it comes to employee rights. If you still think you can limit what your employees say about your company through social media and user-generated content posted online, you are sorely mistaken.

Your best bet is to meet with your company's legal counsel and establish a set of sound and reasonable social media-related policies and guidelines. And since thinking about it is not an action, pick up the phone and get cracking -- before you find yourself in the same situation as the folks in Buffalo.

What is the best way you've found to help keep work out of your employees' online commentary? Leave a comment and let us know.