Truck Stop Missouri Boss on How to Negotiate with Mud Wrestlers, Medieval Actors 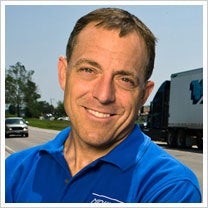 If you told Joe Bechtold in 2000 that he'd someday earn a living doing business with medieval-themed actors and competitive mud wrestlers, he probably would have thought you were crazy. But the unexpected came true that year when Bechtold moved from Australia back home to Missouri to run his family's business: The Midway Truck Stop, now the subject of the Travel Channel's new reality TV show Truck Stop Missouri.

Far from your typical highway gas station, Midway is located on more than 200 acres halfway between St. Louis and Kansas City on Interstate 70. Among the 12 businesses on the property, the Bechtolds own several, including a diner, a motel, an antique mall and an exposition center. Among the other businesses are a fireworks store, a tattoo parlor and a haunted house. Last year, Midway's revenues reached $10 million.

"They [Travel Channel executives] were looking for the most unique truck stop in America and, of course, they found Midway," explains Bechtold, who is 44. Truck Stop Missouri airs Sundays at 8 p.m. EST.

Overseeing such an unusual collection of businesses that cater to some of the most colorful people traveling across the U.S., Bechtold constantly fields wacky business propositions -- from hosting lawn mower races to motorcycle rallies and mud wrestling extravaganzas. Here, Bechtold shares his top tips for negotiating unusual business propositions:

Give every pitch a fair shake, but weed out the bad ones.
Depending on the type of product or service your business sells, taking on unconventional propositions can mean more money for your business. When Bechtold is approached by a promoter about producing events at the truck stop, he asks some basic questions to help qualify the promoter and event. Generally, he wants to know how many previous events the promoter has produced, how they promote the events, how many paid attendees the events draw and what their budget is.

"The answers I get will let me know if I want to proceed further or not," he says.

Know who's pitching you.
The more you know about the company, person or group you're dealing with, the easier it should be to find a common speaking point, Bechtold says. This was true when he was approached by a medieval-themed role playing group that wanted to rent space at the truck stop for an event.

"They have an in-depth hierarchy with crazy names for different roles," Bechtold says. "When I introduced myself as the 'King of Midway,' they immediately warmed up to me and I knew I'd close the deal."

"Leave a little salt on the table."
To Bechtold, this means you shouldn't always try to pinch every penny from your customers. Bechtold put this to practice when a local organization approached him about hosting an event, but they couldn't afford the rent. Instead of telling them to hit the road, he cut them a deal.

"I had a feeling the event had the potential to grow so I reduced the rent substantially in the first year to let them get going," he says. "The event grew for many years and as they needed additional goods and services, they always came to me first. I gained a customer for life."

Want to Know How Gen Z Is Transforming Digital Marketing? Take One Look at Wendy's.