Wheels: What Entrepreneurs Are Driving Now

"It's the cookie car!" they squeal when Resnikoff's Chevy HHR pulls up curbside. Decked out with brown "cookie wheels" that look like dough but are in fact metal and rubber, the retro panel van and its driver--the cookie guy--are routinely greeted with smiles and yells of hello across traffic.

Like a lot of entrepreneurs, Resnikoff's personal car is employed, at least part time, for company business. And similar to entrepreneurs themselves, such cars need to multitask. Whether it's hauling equipment, going to meetings or making trips to the post office, they need to operate within budget, make a good impression and--most importantly--get the job done.

For Resnikoff, his 2007 HHR is a vehicle for advertising his 2-year-old business, The Cookie Department, not just for making his baker's dozen of deliveries each week. His car has become a critical part of his success.

"If I had a cargo van, I would just be another delivery guy," says Resnikoff, a self-described car connoisseur who, at 29 years old, has already owned 18 different vehicles. "People wouldn't stop me as much. When I bought the HHR, it had to reflect me personally, and not just as a cookie-carrying business owner." 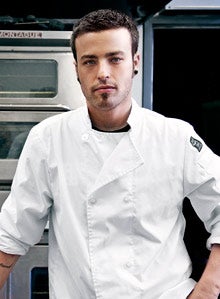 Resnikoff wanted to be easily identifiable, but he also wanted style. He looked into a Ford Econoline but discarded the idea because it was "too big for little cookies." He also considered his parents' advice to forego a car purchase entirely and repurpose his old Toyota Camry, using its trunk and back seat to carry cookies and the rear window to prop up a sign.

Instead, Resnikoff went with the white HHR because it looked like a 1940s milk truck and was available as a panel van without rear seats--the better to carry stacks of his Awaken Baked coffee cookies and other sweet treats to cafes, wine bars and gyms. He's especially fond of the back door, which doesn't have handles and can be opened remotely with the push of a button.

He added a clean, modernist logo to the exterior, making it look like the Secret Service had gone into the cookie business. The customized HHR was clearly the right way to go for The Cookie Department, which sells about 650 cookies each week.

"You never have a second chance for a first impression," Resnikoff says.

The Car as Business Identity

Brian Linton keeps it clean with his fuel-efficient 2008 Toyota Matrix.

What an entrepreneur drives says a lot about his or her business. It speaks to a company's core beliefs and mission.

Brian Linton, who started his apparel business last year, says his 2008 Toyota Matrix is "fundamental to what we do." Founded on the principle that fashion can also do good, his Philadelphia-based United by Blue makes organic canvas bags and T-shirts that are sold at Whole Foods Market, Urban Outfitters, Dillard's and other retailers. For every product sold, the company removes one pound of trash from the ocean and other waterways. 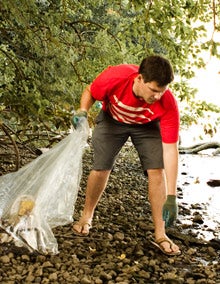 Brian Linton of United by Blue

Linton's high-mileage hatchback is the cleanup vehicle. It has traveled to more than 40 cleanups in 20 states, from Massachusetts to the Carolinas, and hauled more than 27,000 pounds of gunky plastics and other junk from rivers, streams and oceans.

"At one point, there were four big, dirty tires that had been dumped in a river, along with scrap metal we found and maybe 18 or 20 full bags of trash," says Linton, who appreciates his car's rear seats, which can be folded completely flat, its hard plastic cargo area, which makes cleanup easy--and its fuel economy.

"Having a vehicle that gets good mileage is important for the environmental aspect of what we do, but also the startup cost of gas, because we're driving a lot to get to our cleanup locations," says Linton, who has put 68,000 miles on his silver Matrix in the last three years and averages 30-plus miles per gallon.

For Linton, the Matrix helps him walk the talk of his company's mission. For Eric Fitch, CEO of Waltham, Mass.-based Purpose Energy, the 2009 Dodge Ram pickup he drives helps him wear the many hats required for his small business. 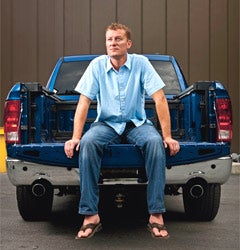 A truck for all seasons: Eric Fitch is ready for anything in his 2009 Dodge Ram pickup.

"In a small company, you do a lot of things," says Fitch, whose 4-year-old company converts brewery waste into renewable energy, turning spent grains into natural gas that's used as boiler fuel. "Sometimes I'm out doing financing and wearing a suit, and sometimes I'm on top of a ladder rebuilding a pump. I just don't know what's going to happen, so I have a truck."

A big truck. Fitch's Ram can haul 10,000 pounds at a time between the flatbed and the trailer. Fitch had already worn out two vehicles, and he needed something heavy duty--something that could tow "weird things" like boulders to help stabilize the installation of a biogas pipe, or 5,000 pounds of calcium needed to buffer the 500,000-gallon bioreactor at his first commercial industrial operation at the Magic Hat brewery in Burlington, Vt.

The only problem: Fitch lives in Boston. He commutes 700 miles each week between the Vermont brewery and his home, so his truck has to get decent gas mileage (the Ram averages 20 mpg on the highway). And with a four-door cab, the truck can accommodate Fitch's wife and triplets.

"My whole life right now is based around my children and my company," he says.

A Need for Speed
Melody McCloskey's Vespa gets 70 miles to the gallon, but that wasn't the reason she bought it.

"I got it right when I started my company because I knew I needed to have a bunch of meetings and get around in no time flat," says McCloskey, who lives in San Francisco and started StyleSeat.com, a social networking site for salon owners and their patrons, this summer. Designed to empower customers to find stylists and stylists to find customers, StyleSeat has acquired more than 25,000 users nationally since launching in June.

McCloskey believes that her red Vespa LX 150 is emblematic of her quick success. "We get a lot done, we do it really fast and we do it in style," she says, adding that she can get around more quickly than she would in a car or even a taxi, and that she can park anywhere. "I can leave five minutes before an appointment and roll up right in front of wherever I have a meeting, whether it's with an investor or a hair salon."

Adding to the advantages: She can dress like a normal person, and if she has to carry a bag, she just pops it in the storage compartment under the seat. "The Vespa is just so easy," McCloskey says.

When you're running your own business, easy counts for a lot.