What's the Secret to Better Brainstorming? 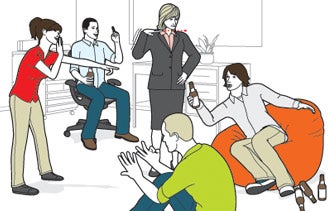 Anyway, the box is stifling. It turns a discussion into an exercise. ("Is this 'outside the box' enough?") And the box denies crucial truths about brainstorming: that there is a goal, and that because of time and money there are always limitations on discussion, even from the very beginning. The box is silly.

The only box to be concerned with is the room you'll use for the session. Which is what this is about. There are ways to brainstorm while not "co-locating," as the sociologists call it, but this is not about that. This is about being in a room with other people.

The Invitation
An invitation to a brainstorm will state the goal, obviously. Although the invitation should be spare, it should include about 20 percent more information than anyone actually needs to feel comfortable participating. If people think they need more information from the invitation, then you're already behind.
(Sample invitation: Let's talk about ________. We're looking for ways to ________ the ________. 4 p.m., Team Area Northeast. It'll be great. I had grits for breakfast this morning.)

And consider including one more person than you think you need. A wild card. Someone who will never ultimately be responsible for what comes out of the session. Maybe a lower-level employee or someone in another department. A favorite uncle, perhaps. Anyway, wild cards are refreshing. As long as they don't talk too much. (More about that in a bit.)

How to Begin
You could stand up and yell, "Get your umbrellas out because that's when I brainstorm," attributing your message to Jay-Z, or not. Your call. You could put a bottle of tequila in the middle of the table. You could note that you wore a fun belt today. The point is, the meeting should feel eventful. A cynic might call it a craven appeal--especially if it involves bribery. But people who are working enjoy minor delights.

"I'll bring in snacks, play music--upbeat music. We have a roof deck we can go out to, we drink beer, we make it super comfortable, because we're running so fast, and we need you to be 100 percent present," says Melody McCloskey, founder of online startup StyleSeat, which is basically like OpenTable for stylists, salons and spas. "I want to let people know that there's a reason I'm pulling you away from what you're already doing."

The worst part of the brainstorm session is often the first minute or so, when the leader has to state the goal and then offer up a few ideas to get things moving. Those first few thoughts are tricky, because you don't want them to be so specific and, you know, good, that people latch on to them like a lifeboat. And you don't want them to be so vague and weak that they depress everyone and kill creativity from the outset. So, there's this way of starting a meeting. It's a kind of inspirational mediocrity. It gives everyone an example that they can easily beat. It lets people know that although you're not an idiot, you're not really sure what to do. It spurs ideas but doesn't intimidate thought. It gets things moving. Inspirational mediocrity. Brilliant.

Bad Ideas
Once things are moving, it's a matter of gently guiding the discussion. Management books have been written about this. But it's never struck us as all that hard. You're surrounded by smart people. And the reason you're leading the meeting is because you've become successful enough that you can tell a good idea from a bad one. As the leader, you allow people to go down certain roads and abandon others. But gently.

"If you've been 10 minutes down some path and you think it's a rabbit hole you don't need to be going down, you just need to ask the question again," says Sam Millen, CEO and co-founder of consumer electronics company Cue Acoustics. "It's a gentle way of reminding everyone why we're here, why we're having this conversation."

Sometimes there's an idea so bad that it destroys all momentum and makes it almost impossible to reverse course. This is the meeting grenade--an idea so misguided that it seizes up the engine of creativity and embarrasses everyone in the room. The meeting grenade usually happens because a person feels they need to speak. Which brings up a crucial paradox about participating in a brainstorm: Speaking is overrated. The key to being in a brainstorm as a participant, leader or not, is to not talk so much. When you do speak, you'll probably have an interesting thing to say, and people will probably listen to you.

A Few Words About Silence
To a boss or the person leading the meeting, silence suggests time is being wasted by people who don't know what they're doing. The tendency is to fill a silence with a prompt. But maybe let a silence hang around for a few seconds. People who are thinking about something appreciate the occasional silence. Meetings in our office sometimes involve six men staring at one another and a seventh looking out the window at the ballet of taxis on Eighth Avenue. Which is fine. Because ideas require thinking.

There's a technique that journalists use: When an interviewee stops talking, just look into their eyes. Most of the time the subject will start speaking again--either to finish the thought or to make things less awkward. And their second thought will usually be better than their first. Nice.

Getting Out
Easy. You get out. You say it's over. "Brainstorming has to be a process that isn't seen as a waste of time over the long term," says Benjamin Palmer, co-founder and CEO of digital marketing and creative agency The Barbarian Group in New York. "You get a bad reputation and then nobody wants to go to your meetings anymore."

Of course, you're not really getting out. You're just finishing up the beginning.

"In the last 15 minutes, set up a project that will be open for the next two weeks," says Charles Seybold, co-founder and CEO of project management software developer LiquidPlanner. "Collect these ideas, prioritize them and see how they need to be fleshed out. That's a different proposition to the individual."

And it is a proposition, the brainstorming meeting. What seems like a fun thing, an almost frivolous thing, is actually something pretty serious: the start. And more than any other meeting, it allows people to exhibit raw talent. There's a lot at stake there--for the leader and the participants.

Thankfully, the mechanics of it are simple. All you have to do is talk. Just not too much.