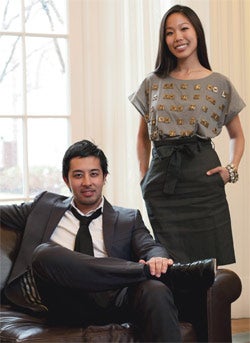 Daniel Gulati, the 27-year-old co-founder and CEO of FashionStake, doesn't hesitate to describe his graduation from Harvard Business School in 2011 as an "amazing experience."

Nor does he hesitate to add, though, that business school is not for everyone, and that it's far from easy--especially when it coincides with the development and launch of an actual business.

The native of Australia enrolled with a relative head start in business and fashion, having co-founded a successful T-shirt company while attending the University of New South Wales as an undergrad. He then turned to Harvard's MBA program to further his knowledge and expand his network.

The biggest boon came almost immediately, when he was introduced to Vivian Weng, a fellow member of Harvard's Retail and Luxury Goods Club. Like Gulati, Weng had a passion for and an interest in fashion. She also had experience working with established brands, such as Elie Tahari and Escada, as well as emerging designers--the latter of which, she learned, had few opportunities to market themselves.

His connection with Weng reinforced Gulati's confidence in the power of networking. Days after that September 2009 meeting, they joined forces to conceive FashionStake, with the mission of aggregating works by emerging designers from the U.S. and abroad and putting them on one platform, creating a one-stop shop for under-the-radar labels.

Over the next two semesters, Gulati and Weng, who serves as FashionStake's president, continued to build the business while taking advantage of being in school. In particular, they solicited feedback from students and professors via Harvard's business plan competition.

Once again, networking paid off. Their path to the competition's semifinals led to a wave of press, which attracted designers interested in the service and ultimately led to funding from Battery Ventures (which has also funded Groupon and Angie's List) and Alexis Maybank (of Gilt Groupe).

At that point the challenges of fulfilling a business plan and pleasing investors collided with the pressures of working toward a degree. "It was really time-consuming," Gulati says. "We went to class Monday and Tuesday, and then from Wednesday to Friday we would catch a bus from Boston to New York, where our office was located. It was actually very tough to do both."

His and Weng's resilience, however, served them well. FashionStake officially went live during New York's Fashion Week in September 2010, offering 60 products by four designers. Today, the online aggregate has more than 40,000 registered users shopping for more than 2,000 products by some 250 designers from as far away as Turkey and Singapore.

For Gulati, business school was a catalyst and an impediment to his nascent enterprise, but ultimately, the benefits of an academic program seem to have paid off.