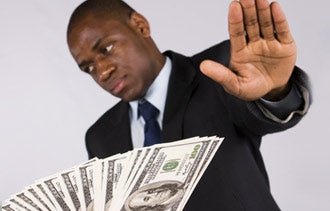 The small-business lending situation is a lesson in irony: Despite government efforts to spark more lending, uptake is down. In June, the SBA reported that in the first quarter of 2011, loans to small businesses fell $15 billion, marking the third straight quarter of decline. That figure has been trending downward since 2008--but this drop comes in the wake of major government efforts to incite more lending.

Much of the problem, it seems, is not lack of available capital, but lack of demand for it among small businesses. A combination of recession-born pragmatism and tougher lending restrictions has all but strangled the regular flow of capital from banks to small businesses.

Some innovative community banks aim to change that. Many are moving beyond banking services, helping clients discover financial products they might not have considered. Counseling, education, networking opportunities--these institutions are pulling out all the stops in an effort to spur new lending growth. Will it be enough?

The Push to Give Away Cash
The Small Business Jobs Act that was signed into law a year ago was expected to bring a big capital infusion. Among the provisions is a $30 billion Small Business Lending Fund (SBLF), which provides capital for small banks and $20 billion in state initiatives to enhance small-business lending. Proponents estimate that the fund's capital could fuel as much as 10 times its value in small-business lending--but as of June, only 869 community banks had applied for $11 billion of the fund.

Community banks often are scrappier than larger banks, taking on loans that require more complex methods to secure, partnering with other entities, or even overlooking elements of a spotty application if key concepts are strong.

Why? Perhaps because of how complicated it is. "It has taken a little longer to get all the t's crossed and the i's dotted on that program," says Paul Merski, executive vice president and chief economist of the Independent Community Bankers of America. "It was a little bit more involved because it isn't just a capital program, it's a program to foster small-business lending."

Funds began to be released to these banks in July, and Merski estimates that the funds drawn will begin to make a difference in the small-business lending marketplace in early 2012.
"By early next year, you'll have enough capital in place and loans processed to see a measurable difference in the flow of credit to small businesses," Merski says. Still, many are skeptical that the influx of capital will do anything to improve the small-business lending situation. The problems, they believe, are elsewhere.

Soft Demand, Tough Standards
According to the March National Federation of Independent Business Small-Business Optimism Index, 93 percent of small businesses say either all their credit needs are met or they are not interested in borrowing--a historic high. The survey concludes that lack of demand, rather than the availability of credit, is blocking loan growth.

That's part of the picture, but underwriting standards also have made borrowing tough for small businesses, says Dana Kilborne, president and CEO of Orlando, Fla.-based Florida Bank of Commerce.

Community banks are moving beyond banking, helping clients discover financial products they might not have considered.

"The difficulty for small businesses wasn't so much that credit was unavailable," she says. "It was that it was dominated predominantly by the large banks, where there's been a significant rule change in terms of what their credit standards were, or they just weren't lending at all." Kilborne says the lack of consistency in lending standards during good times led to a swing to tighter credit standards that made it difficult for businesses to qualify for loans.

The real estate crisis could have played a part as well. Half of all small-business loans are backed by some sort of real estate as collateral, Merski says. As values decline, those properties have less equity to secure credit.

Some banks are beginning to see a turnaround in confidence, however. While New York City's Sterling National Bank, a publicly traded $2 billion institution, falls outside the typical community banking threshold of $1 billion, the bank works primarily with New York metro-area small to midsize businesses.

"A year ago, I would have told you that the better clients are only utilizing 40 to 50 percent of their available credit," says Sterling president John C. Millman. "They were controlling inventory and expenses, allowing inventory to run off. That changed in the last six months. We're seeing more enthusiasm and utilization of credit lines increase. I would say they're running at 65 percent today."

Hustling for Flow
When the money is there to lend, community banks typically are working hard to make deals with small businesses, Merski says.

At MidSouth Bancorp, which serves southern Louisiana and eastern Texas, there is no question about the quest for small-business customers. "We take out billboards that say, 'We have money to lend,'" says CEO Rusty Cloutier. "Every Thursday morning, we have an aggressive calling campaign where all of our offices are calling on small businesses, trying to get our bid out and find ways we can lend to them."

MidSouth has applied for $32 million from the SBLF, Cloutier says, and is planning to get its low-interest lending incentive for SBLF down to 1 percent. If a bank increases small-business lending 10 percent over the previous year, it can pay as little as 1 percent interest on the capital drawn from the fund. MidSouth plans to use that low-interest incentive to pass along better rates to customers.

Some banks are also using the power of their networks to build relationships with prospective lending clients. At North Jersey Community Bank, a female vice president organized a group of 18 women business owners and leaders from throughout northern New Jersey to build relationships and mentor one another. Her inspiration came after noticing that women have a tendency to spread the word and become advocates for businesses and products they're passionate about, says North Jersey Community Bank chairman and CEO Frank Sorrentino III.

Each month these leaders are being hosted by the bank for an event that has become an important part of their professional development. In similar fashion, Sterling holds regular luncheons in its posh, on-site dining room for business clients to mingle with the bank's top brass, and it also hosts 70 seminars and continuing education events each year for its clients.

"We think our best clients are the ones that have good management, and we do whatever we can to assist them and give them access to things they wouldn't ordinarily have, like these quarterly seminars," Kilborne says.

Bryn Mawr, Pa.-based community bank Bryn Mawr Trust has assembled several advisory boards made up of local business owners to advise the bank on the needs and services of business customers. Each board's eight to 10 members are paid a stipend of $125 per meeting to give their opinions on everything from needed services to new branch locations, says CEO Ted Peters. The bank has adopted such services as remote deposit capture, which allows companies to deposit checks without making a trip to the bank; and establishing a higher-yield business savings account, based on recommendations of the boards. This attracts businesses that may become prospects for loan services, Peters says.

Community banks often are scrappier than larger banks, taking on loans that require more complex methods to secure, partnering with other entities, or even overlooking elements of a spotty loan application if some of the key concepts are strong.

MidSouth partners with two area nonprofits that process business micro-loans of as little as $1,500. Although that's not business the bank would typically target, it allows them to establish early relationships with firms "that might become better customers for us," Cloutier says.

Kilborne says that community bank lending decisions go beyond just the financial statements. Sorrentino tells the story of a liquor store client who needed a loan. The prospective business owner lacked the collateral to secure the $300,000 loan himself, so Sorrentino and his team asked him questions about the resources available to him.

"As we sat down and talked, suddenly there was this relative who had been in the liquor business and knew it, so that was appealing," Sorrentino says. "Then there was a cousin who had equity in his house that he could bring to the table to secure the loan. Suddenly, when you put all of these pieces together, the deal made sense."

It's that kind of flexibility--and willingness to look beyond the traditional--that could make smaller banks a better option for business lending, Sorrentino says. And, he says, that kind of "let's get this done" approach is what has allowed North Jersey Community Bank--and others like it--to continue to lend to small businesses and grow, even during the economic downturn.